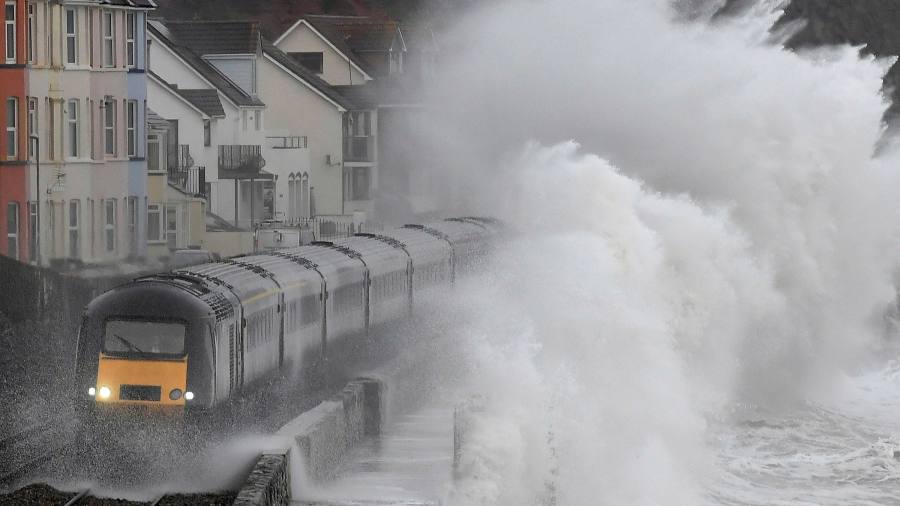 In the coastal town of Dawlish in the south-west of England, engineers are working day and night to protect their 175-year-old railway from the modern threat of climate change.

The waves of the English Channel hit the sea wall of the railway built by Isambard Kingdom Brunel, one of the leading civil engineers of the Victorian era, making this part of the railway particularly vulnerable. In 2014, part of the railway, which connects London with Penzance in Cornwall, was swept away by a severe storm.

Seven years later, teams of civil engineers have returned, waiting for the tide, as they replace crumbling infrastructure. The new wall, made of eight-foot-high concrete slabs, is designed to protect Dawlish Station and the railroad for the next 100 years.

The new coastal defense, built to withstand rising sea levels of one meter, is a stark illustration of how large parts of Britain’s rail network, first built by Victorian entrepreneurs in the 19th century, are under growing threat from climate change.

Britain was a pioneer of the railways, which played a key role in the industrial revolution. But age is now the enemy of the web. Trains continue to run on routes charted from the 1830s onwards, unlike continental Europe, where many railroads were rebuilt after World War II.

Legacy is a network that was not designed for rapid changes in weather patterns. In particular, 19th-century planners tried to buy as little land as possible to save money when building rails, which meant narrow cuts with steep sides that are now prone to flooding.

The cost of weather-related delays on British railways has risen steadily over the last decade, from £ 45 million in 2009-10. to around £ 100 million in 2019-20, according to Network Rail, the state’s infrastructure operator.

Extreme weather can damage rails, many old bridges and tunnels, and a network of tens of thousands of cuts and embankments.

“The pattern is such that individual events are becoming more frequent and intense,” said Martin Frobisher, director of safety and engineering at Network Rail. “Every year we break time records. . . and each of these extreme weather conditions affects the railways. ”

Still, Network Rail is facing a lot of uncertainty over future government funding: ministers have pushed through spending cuts that have affected some upgrades and proposed new rail links, especially in the north of England.

Tony Travers, a transport expert at the London School of Economics, warned that preparing a network for climate change “would cost a considerable amount of money”, adding: “It is not at all clear whether this is available.”

As part of an existing five-year financial settlement that lasts until 2024, Network Rail plans to spend £ 500 million to mitigate extreme weather events. Frobisher said he plans to set aside more money to maintain earthworks and drainage over the next five years.

She is financially encouraged to tackle climate change as she has to compensate railway operators for weather disruptions. When it was Dawlish’s turn severely damaged In 2014, Network Rail paid up to £ 16 million in damages.

Railway leaders have warned that the problems facing the network will only get worse in the coming decades as severe weather events become more frequent.

Network Rail concluded that “the impact of extreme weather and climate change [was] accelerates faster than its planning assumptions, ”according to a 2018 report by the State Audit Office, the state spending supervisor.

“This is a risk for the rail industry that is moving forward, this is a risk that the industry is aware of, and when you find out about it, you can start doing things about it,” said Malcolm Brown, CEO of Angel Trains, a rolling stock leasing company. and chairman of the Sustainable Rail Executive industry lobbying group.

Network Rail has turned to new technology to track rails and other infrastructure, using drones and artificial intelligence to sift through the mountain of data collected by cameras mounted on trains. He is also working with the Met Office to try to better predict which parts of the trail could be at risk during storms.

“We are seeing a shift from traditional maintenance to predictive maintenance programs that rely more on digital technologies,” said Nicola Sandri, head of global transportation infrastructure at McKinsey.

Railway safety experts have warned that the United Kingdom is not immune to the catastrophic floods in Germany and Belgium last summer, which killed nearly 200 people and estimated 1.3 billion euros in railway damage. The floods damaged 180 level crossings, more than 50 bridges and over 1,000 signal and electrical masts.

Three people were killed after a train derailed in the north-east of Scotland in August 2020 after heavy rain, the first deadly rail accident in the UK in more than a decade.

Although the industry is still awaiting complete accident findings from accident investigators, a report on climate change by the Railway Safety and Standards Committee says it seems “clear that climate change and the emergence of extreme weather conditions [was] the root cause. ”

Newer projects are designed with built-in resilience. The engineers of HS2, a new high-speed railway being built between London, Birmingham and finally Manchester, are incorporating what are called sustainable drainage systems using landscaping techniques along the tracks. They are designed to ensure that services can work even during floods that occur once every 1000 years.

But the age of most of Britain’s rail network makes the cost of protecting all lines from the weather too high and will mean some tough decisions will be needed, says George Davies, director of sustainable development at RSSB. Ultimately, the surest option would be to cancel services during extreme weather events, he added.

“I don’t believe it’s sustainable and it’s almost certainly unaffordable to design our railroad to be 100 percent climate resistant, so a compromise will be needed,” Davies said. “I’m not yet sure the industry has a particularly good idea of ​​what might be acceptable.”