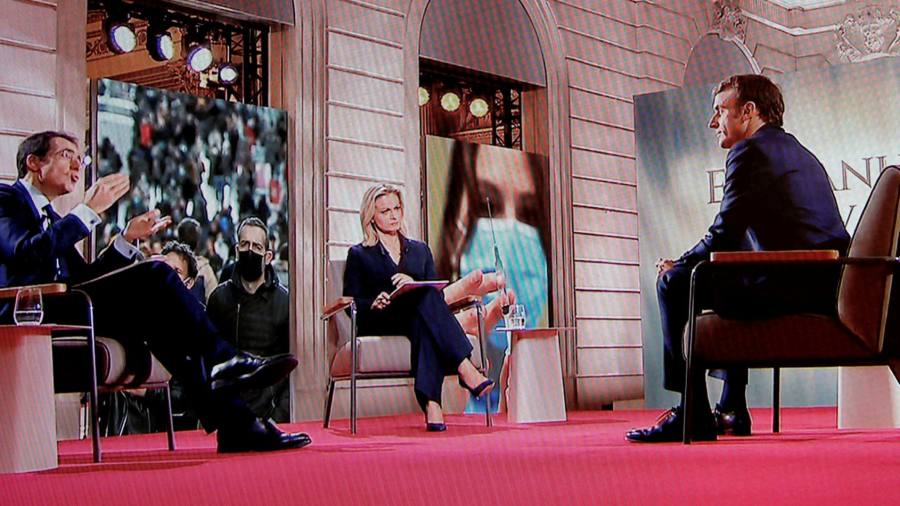 Emmanuel Macron, the French president, has vowed to continue with economic reforms begun since taking office in 2017, but has not confirmed he will run for re-election next April, despite his lead in polls and widespread expectations that he will run for a second term.

In a two-hour televised interview on TF1 on Wednesday night, Macron defended his four-and-a-half-year presidential record in the face of the Covid-19 pandemic, launching reforms to liberalize the economy and fight anti-government yellow vests demonstrations, as well as responding to attacks by Islamist extremists.

He said he had learned to love the French more than ever, but he also admitted that he often made mistakes. “I’m wrong, yes, many,” said Macron, who has been accused by his rivals in the past of being an arrogant president of the rich. “I try not to repeat them.”

Opposition politicians immediately criticized Macron and TF1 for what they portrayed as a mild interview that allows him to present arguments for re-election without officially announcing his campaign.

“It’s propaganda broadcast by the candidate,” said Eric Ciotti of the right-wing Les Républicains, whose candidate shows that he has a chance to defeat Macron. “Elysée panicked over the candidacy Valerie Pécresse, ”Ciotti said in a debate on TF1 shortly after the interview.

Jordan Bardella from Marine Le PenHis far-right Rassemblement National called Macron a “complacent” president who was clearly a candidate. Boris Vallaud of the Socialist Party said the interview, which is said to be about where France is going, means “having heard a lot about where Macron is with himself”.

Macron defended the need to modernize France’s expensive pension systems – significant reforms suspended during the pandemic – by simplifying 42 different regimes, but accepted that his plan to replace them with a single system had raised too many concerns and would have to be changed.

He also said an increase in the retirement age from 62 is inevitable to ensure pensions are sustainable. “We all have to be ready for the idea of ​​working longer,” he said.

Macron’s opponents on the right and far right, including the polemicist against immigration Eric Zemmour, have made immigration and law and order the most prominent themes of the campaign so far, prompting Macron to reaffirm his determination to “control” immigration without completely stopping it, as promised by some of his rivals.

“There has never been immigration,” Macron said. “Yes, we have a management problem. [But] we need this immigration of workers, in a limited, selective and controlled way to start our economy. ”

A poll published Wednesday by Harris Interactive for Challenges magazine gave Macron the lead in voting for the first round of the presidential election, with 24 per cent, followed by Pécresse with 17 per cent, Le Pen with 16 and Zemmour with 15.