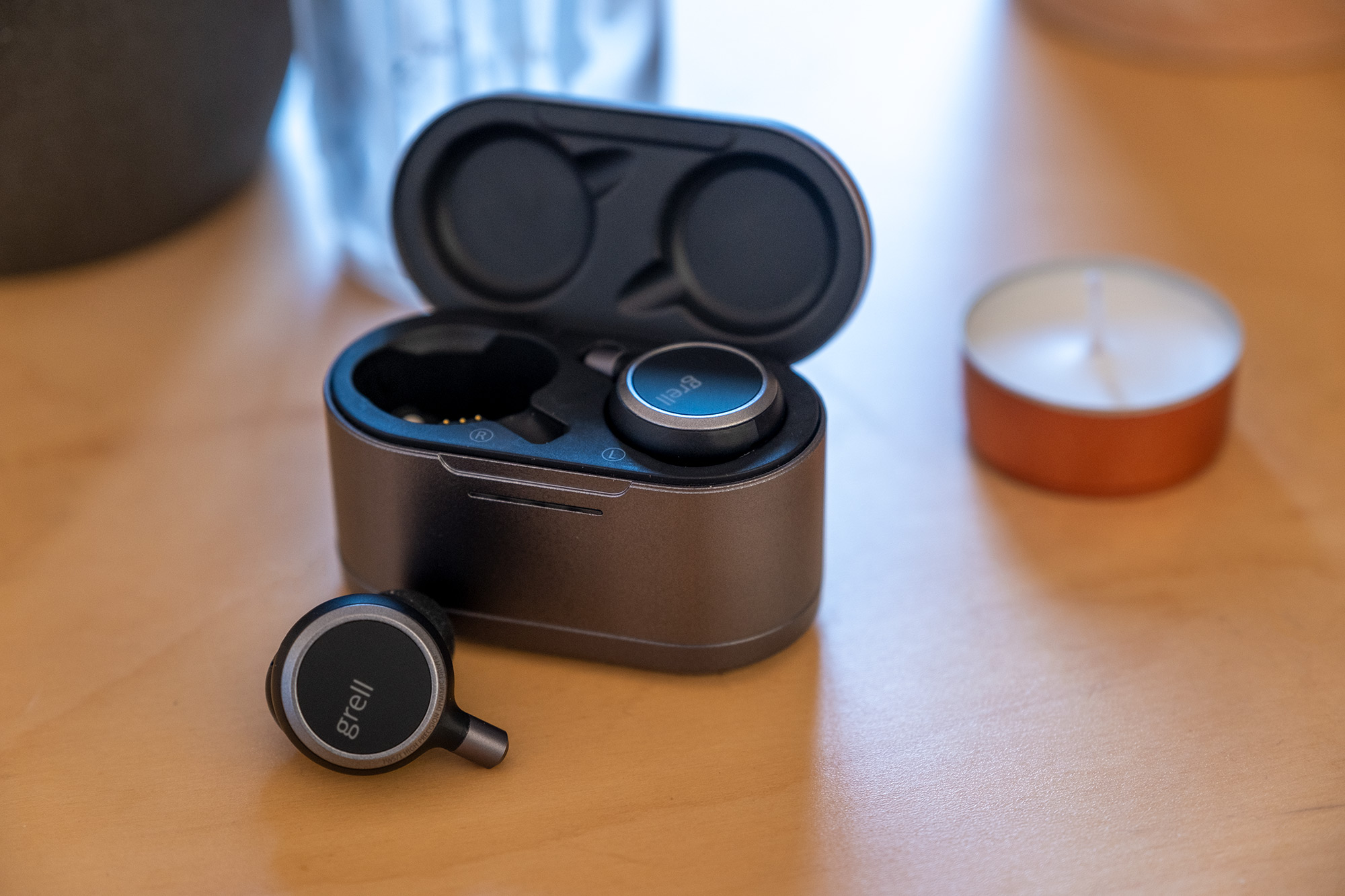 You say, a new entrant in the right space for wireless headphones? Of course, this could be quite common these days, but this one – Grell Audio – comes with a fairly strong legacy. Its founder, Axel Grell, is well known in the headphone industry for his extensive work at Sennheiser on some of the company’s most prestigious products. The TWS / 1 is his first solo product under the Grell brand. Accordingly, we are interested in what a $ 200 wireless headset can do.

TWS / 1 has a modern look. Mostly the circular design is interrupted only by a small AirPod-like protrusion on each bud. Originally the plan was for the outer casing to be made entirely of metal, but physics and radio waves meant that some concessions (plastic parts) were needed. In general, they maintain a superior feeling that is above that often found in this price full stop. Visually they remind me a little of Jabra Elite 75t, but a slightly lower profile.

When it comes to fitting, this slightly more modern design means you don’t feel like something is balancing in your ear, which can sometimes happen with more round models. As usual, they come with a charging case that promises four full TWS / 1 charges. The buds themselves offer about 6 hours per charge, which is true for my experience with ANC activated. Interestingly, the buds are located in the housing from right to left and vice versa. I’m not sure why that would be, but it needs to be remembered a bit (you’ll be reminded soon because the buds don’t fit the other way around).

In the world of me-too products, it’s hard to stand out. The easiest difference is the price, then the sound quality and / or additional / premium features. Grell Audio seems to have tried to entertain all three, and I would say, with overall success.

The price puts TWS / 1 in an unusual category. Many premium brands land in the $ 250 and above zone, while more affordable options, such as Google’s second generation Pixel headphones or the already mentioned Jabra’s live in the $ 150 area. budget options south of $ 100, are also becoming more common. This, therefore, puts TWS / 1 on the switch between high-mid and low-premium. I would bet this is completely intentional as the set of features and build quality distorts the higher level, but the simple packaging and more affordable price indicate a larger audience.

When it comes to sound quality, things are a little clearer here. In my testing, I was generally satisfied with the default sound. It was maybe a little thinner for my personal preferences with a little weight on the bottom for a typically commercial sound. But Grell has partnered with SoundID – a third-party application that adapts selected brands of headphones to your personal preferences / hearing.

We’ve seen things like this before, mostly with Nura taking this to a whole new level. SoundID is a little underrated in its approach. He still uses some form of hearing test, but instead of asking if you hear certain tones, he simply plays some music for you and asks “which do you prefer, A or B”. After I finished this short test, the difference was night and day. With my personal profile activated (transmitted to headphones so it applies no matter what you’re listening to), my usual mix of indie and rave nonsense from the mid-10s came to life.

I prefer a dynamic range and stronger low and medium high frequencies. At least I guess I did because it was the biggest change in sound after the test ended and they were immediately much more comfortable for me. In the SoundID app, you can switch between the default sound and your own profile, and that really makes a big difference. you do not know need to get a good sound, but I guess you’ll be more satisfied with what it gives you.

Coincidentally, SoundID is also where you will get software updates for TWS / 1. I had one during testing and it improved a few things, including touch controls that don’t respond a bit. They still don’t read my taps 1: 1, but it’s roughly on par with most other touch control headphones I’ve used. Before the update, it was much more frustrating (or did I just learn the technique?).

These controls cannot be configured by the user, so you are stuck with what Grell gives you. But luckily, that’s almost all you’d want and without too many complicated combinations of touches or gestures. Swiping your finger forward or backward on the left ear skips songs, up or down on the right for volume and so on. I’ve had problems with the playback / pause control on the right and the transparency mode on the left – both are more annoying if they don’t activate right away.

This brings us to smart (er) features. As mentioned, TWS / 1 has Active Noise Cancellation and Transparency mode – both of which are becoming more standard. But there is also a noise reduction (NAR) mode. Grell explained to me during their first briefing to announce that ANC is great for persistent lower frequency noise, but doesn’t work so well for higher frequency interference (I mean, a baby crying on a plane). NAR is Grell’s own attempt to offer some reduction in these types of sounds.

In practice, it was difficult for me to determine the difference made by NAR. With the ANC, it’s easy to hear the quiet rumble of the road outside my apartment lowering the volume. It may not be the strongest ANC I’ve heard, but it does its job. With NAR, whatever the ear equivalent of squinting, it turned out to be a little more vague. It seems to improve the listening experience a bit in combination with ANC, but it’s also hard to say how much of that I wanted to do. It’s an interesting concept though, and I hope Grell will be able to improve over time.

Other small benefits include “mono” mode (listening with only one bud). This in my opinion is not as common as it should be and adds more flexibility to those who want to maintain a certain spatial awareness without having to wear both buds. Also, it’s obvious that some people prefer to handle their calls as well (reliving the days of Bluetooth headsets).

All in all, Grell has taken into account the price, features and sound quality enough that the result is a promising first product of the new brand. In particular, price is a good balance between signaling premium ambitions without being too out of reach for mainstream casuals. I’d love to see some further advances in NAR technology and the controls could still be more sensitive, but if you’re looking for a new set of genuine wireless headphones that can be tailored to your taste, this is a great place to start.