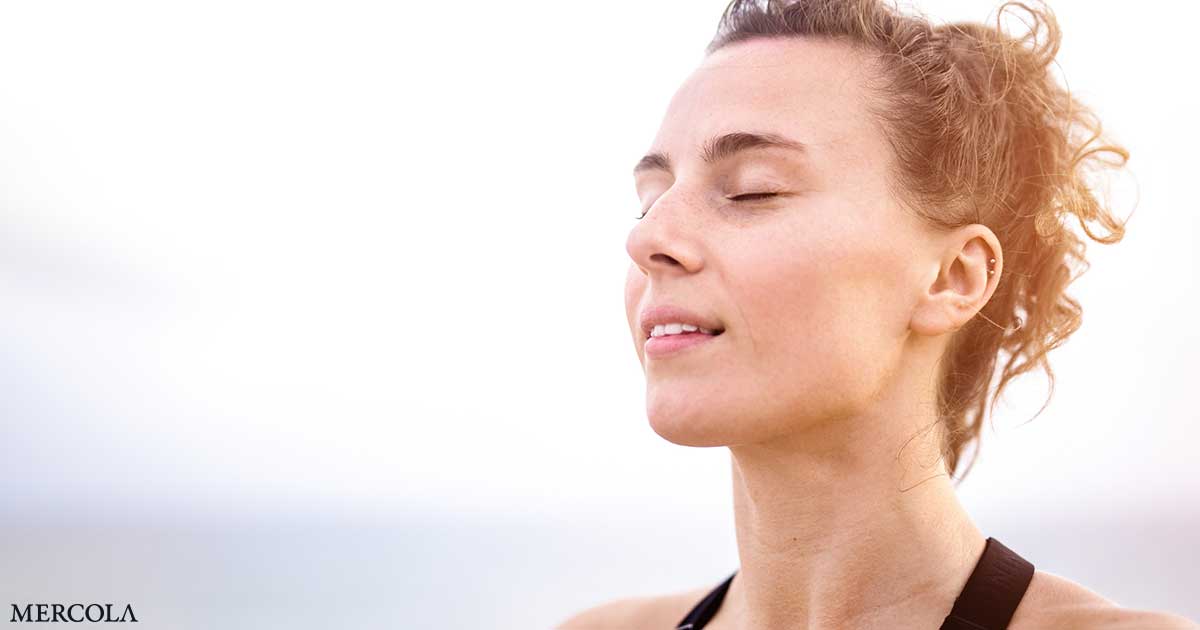 This article was previously published on June 29, 2020 and has been updated with new information.

Breathing is universal, common and almost always automatic. When you are under stress, your pattern and breathing rate change. This often results in increased chest breathing in response to a “fight or flight” situation, a response triggered by the autonomic nervous system.1

In April 2019, a headline in The New York Times reported: “Americans are among the most stressed people in the world …”2 That was just under a year before the COVID-19 pandemic raised stress levels even more.

To Americans, stress is no stranger. The survey was conducted in 2007 by the American Psychological Association (APA). In a press release, they said one-third said they lived with “extreme stress” and 48% thought their stress had “increased in the last five years”.3 Russ Newman, executive director for professional practice at APA, commented:4

“Stress in America continues to escalate and affects every aspect of people’s lives – from work to personal relationships to sleep patterns and eating habits, as well as their health.

We know that stress is a fact of life and that some stress can have a positive impact, however, high levels of stress that many Americans say can have long-term health consequences, ranging from fatigue to obesity and heart disease. “

Fortunately, your breathing is not completely automatic. Controlled breathing is one strategy that has been shown to be effective in reducing physiological stress indicators and improving feelings of calm.

This means you can control your breath to help manage stress, improve relaxation and take bigger steps to take control of your health. Let’s start with a brief explanation of some of the different parts of the nervous system.

Stress and your body’s reactions to environmental stimuli that cause stress are survival mechanisms. However, chronic activation of the system causes a consistent release of hormones that produce harmful physiological changes.

Although the fight-or-flight response is critical if you face a bear or run away from an attacker, constant exposure to social stress can increase your risk of chronic illness and death.5 Your response to a stressful situation begins in the amygdala of your brain, which plays a role in how you deal with emotions related to stress, joy and other scenarios.6

The amygdala sends a signal to the hypothalamus, which communicates with the body via the autonomic nervous system. This system controls functions in the body that occur automatically, such as heart rate, blood pressure and respiration.

Each of these changes happens quickly and without your input. Therefore, you can jump out of the way of the snake into the grass before you fully recognize that anything is in your way.

Keeping the sympathetic nervous system active and ready has a detrimental effect on your health. By using controlled breathing, you can calm down and create real physiological changes, including:7

The breathing technique in the boxes is what SEALS uses. In this video, Mark Divine from SEALFIT demonstrates box breathing and tactical breathing. He explains that tactical breathing is used during performance to calm the mind when you are under duress. For those of us who are not in combat situations, this can happen in a meeting room, during an athletic competition, or during a test.

SEALS use box breathing as an exercise technique, so tactical breathing is effective when needed. There are four steps and each is done at the same time. Breathing affects how you think and feel.8 Lynne Everatt is an author, personal trainer and wellness expert from Toronto. She spoke to a Forbes reporter, saying:9

“Stress and anxiety trigger a neurocircuit designed to be used in moderation to deal with life-threatening or death threats, rather than on a daily basis in response to bumpy traffic, a toxic boss, or work overload.

Chronic stress has a corrosive effect on the brain associated with degeneration of the hippocampus (brain memory center) and dysfunction of the prefrontal cortex that can manifest in our lives as depression, dementia and impaired executive function. “

To start practicing breathing in a box, settle into a quiet place where you can concentrate and maintain good posture. Ideally, you want to measure how many cycles or minutes you can perform the technique and work for up to five minutes.10

Take every step below with focus and intent on your actions. Most people who use this technique recommend inhaling and exhaling counting to four or five. Both are acceptable as long as each phase lasts the same time.

Step 3 – Inhale slowly until slowly counting to four through your nose, keeping your back straight and breathing through your abdomen so that your shoulders do not rise.

Step 4 – Hold your breath slowly counting to four and return to step 1.

Nasal breathing offers specific health benefits. Researchers have found that people who normally breathe through their mouths have a higher risk of sleeping problems and attention disorders.11 One theory for this is the difference in brain oxygenation.

Individuals who breathe through their mouths tend to hyperventilate or get more oxygen than they need.12 This lowers the level of CO2 in the body, which is important because you need a balance of oxygen and CO2 for optimal functioning. Breathing through the nose helps with that.

By stimulating the vagus nerve, and thus the parasympathetic nervous system, nasal breathing can help reduce stress, anxiety, and the release of stress hormones. Breathing through your nose helps you breathe less.

This may sound like a bad recommendation, but many people are chronically over-breathing and depleting their carbon footprint. Chronic mouth breathing is associated with several health problems, including:

As I already wrote in “Best Breathing Techniques for Better Health,” the function behind box breathing that reduces stress, raises CO2 levels, and signals that your parasympathetic system is breathing through the diaphragm. You can easily assess your body’s tolerance to CO2 at home, using a technique developed by Dr. Konstantin Pavlovich Buteyko.23

This Russian doctor has found that the level of CO2 in your lungs is related to your ability to hold your breath after a normal exhalation. Start by sitting upright with your feet flat on the floor. Inhale and exhale slightly through the nose. After exhaling, pinch your nose to keep air out and then start the stopwatch. Hold your breath until you feel the first urge to breathe. When you feel the need, keep breathing and record the time.

Your first breath should be calm and controlled through your nose. If you feel you have had to take a deep breath, then you have held your breath for too long. What you just measured is called a “control pause” or CP. It is a reflection of your body’s tolerance to carbon dioxide. Most people can hold it for 20 to 40 seconds, but 40 to 60 is optimal. Anything less than 40 can be a cause for concern.

One strategy to improve your CP is to raise your fitness and endurance levels. The second is to improve breathing technique by expanding the abdomen instead of lifting the shoulders. When your shoulders are raised during inhalation, it is called vertical breathing.

This makes you feel taller and does not involve abdominal enlargement. However, proper breathing causes your central part to expand and is called horizontal breathing. This affects your diaphragm, allowing you to inhale more fully and stimulate your vagus nerve.

Another reason for nasal breathing is increased production of nitric oxide (NO).24 Your body also produces NO in other places, including endothelial cells. This is a soluble gas that has some exceptional health benefits, some of which I talk about in “The Importance of Healthy Bacteria in Nitric Oxide Production”.

Many of these benefits may be due to the fact that NO is a signaling molecule. Doctors use gas in a number of clinical settings, including to help reverse pulmonary high blood pressure in newborns. The NO produced by your endothelium helps to relax the arteries and lower blood pressure. This helps promote oxygenation of all your organs.25

Another advantage of inhaled nitric oxide is in the treatment of viral infection. Clinical trials are currently underway to treat people infected with SARS-CoV-2. The main actions that could help in the fight against COVID-19 include:26

Louis J. Ignarro, PhD, author of an article in The Conversation, was one of three Nobel Prize winners in physiology or medicine in 1998. A group of pharmacologists has discovered how nitric oxide is formed and how it acts on the body.27 Nitric oxide is produced in the nasal cavity, but not in the mouth.

This means that those who chronically breathe through the mouth bypass production that can be inhaled into the lungs.28 This direct delivery helps increase air and blood flow within the lung tissue, and inhibits the growth and replication of viruses and other microorganisms. A clinical trial is currently underway for:29

“… to determine whether inhaled NO improves short-term respiratory status, prevents future hospitalization, and improves clinical course in patients diagnosed with COVID-19, especially in the emergency department.”

You can help increase NO production at home by using a simple, four-minute exercise three times a day. Dr. Zach Bush, whose triple certification includes expertise in internal medicine, endocrinology and metabolism, called the exercise Dump Oxide Dump. He says it’s anaerobically effective and the more you do it, the better it works.

The exercise can be performed at home without equipment and can satisfy any level of fitness. It works by stimulating the release of nitric oxide. You will find more about exercise, how to perform it and why it is so useful in “Fitness Test: Why You Should Try Nitric Oxide Exercise”.