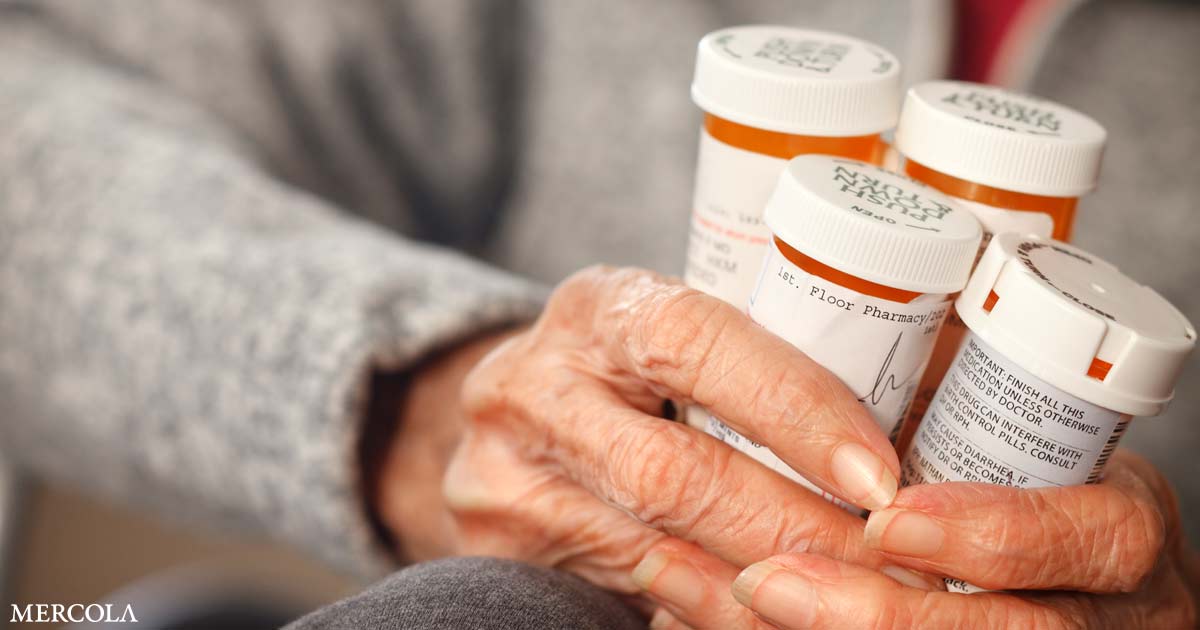 Polypharmacy or the use of multiple drugs is common in the elderly. While 89% of people aged 65 and over take at least one prescription drug, 54% take four or more.1 Data from Merck similarly found that nearly 80% of older people regularly take at least two prescription drugs, while 36% regularly use five or more different drugs – and this does not include over-the-counter drugs.2

Adverse effects of polypharmacy are common and may lead patients to seek more and more medications to treat side effects caused by an unsafe medication regimen. It is a vicious circle, one perpetuated by a broken health system that revolves around pharmaceutically guided, fragmented care.

Not only do many patients visit multiple doctors, each of whom can prescribe their own set of medications, but patients can put pressure on physicians to prescribe medications they have seen in advertisements directly to consumers. Instead of looking at the bigger picture of how to become healthy, taking into account essential factors such as diet, stress, and physical activity, “health care” for the elderly often turns into “drug care,” with potentially disastrous results.

A comment by Dr. Mark E. Williams published on Medscape highlights how extreme polypharmacy can become. In some cases, it was not just four or five drugs, but dozens of them, and in the case of Williams’ Allison patient, it was 43. The woman was transferred to a chronic care facility for long-term care. to bipolar disease.

She had been treated in hospital a few days earlier for mental health problems, which Williams said was “probably linked to inappropriate polypharmacy”.3

“Despite being admitted to the hospital for side effects related to polypharmacy, Allison was discharged to my facility for 43 prescription drugs and almost the same number of over-the-counter (OTC) drugs. It took the nurse more than 10 minutes to review the medication on the phone with me, ”he wrote.4

“The chemical broth in her body leads to mental and physical problems,” Williams told the patient’s daughter, but she too accepted the idea that more drugs equals better care. After overcoming the patient’s resistance to stopping medication, Williams managed to reduce Allison’s medication to about 15 over a three-month period – still a staggering number, but less than 43.

“Allison has improved, both mentally and physically,” Williams wrote.5 but challenges continued, including a patient demanding a memory drug she saw advertised on television, and an incident in which her daughter gave her help sleeping without a prescription, leading to lethargy, confusion and slurred speech.

Eventually, Allison was transferred to another facility, where dangerous polypharmacy undoubtedly continued. Although Williams’ comment highlights the extreme case, it is not unique – polypharmacy is prevalent among the elderly.

When drugs are prescribed in excessive amounts, including for the treatment of side effects of other drugs, the patient’s health suffers. “The use of many drugs can result in drug-related problems such as inappropriate indications, therapeutic duplication, adverse effects, drug interactions, unnecessary drugs, poor adherence, and pressure on health care resources,” according to an article in The Journal of Nursing.6

She also noted that polypharmacy is a preventable risk factor for hospitalization of the elderly due to drug side effects. Meanwhile, the risks of polypharmacy are well noted. Adverse outcomes including mortality, falls, drug side effects, prolonged hospital stays, and hospital admissions are listed in BMC geriatrics, and the risk of injury increases with the number of medications.7 According to the systematic review:8

“Damage can occur due to a multitude of factors, including drug-drug interactions and drug-disease interactions. Elderly patients are at even greater risk of side effects due to reduced kidney and liver function, lower lean body mass, reduced hearing, vision, cognition and mobility. ”

In 2007, Dr. Michael Stern, a geriatric emergency specialist at New York Presbyterian Hospital, even told a New York Times reporter that polypharmacy accounts for more than a quarter of all hospital admissions and would be considered the fifth leading cause of death if categorized.9

Older people are more sensitive to the side effects of medications

“Side effects are also likely to be more serious, affect quality of life and result in doctor visits and hospitalizations,” according to Merck’s handbook, which also explains several reasons why older people are so sensitive to drug side effects:10

Some common examples of how medications can affect the elderly differently include blood pressure medications, which can lead to more dramatic drops in the elderly, leading to symptoms of dizziness and falls. Older people can also become confused and sleepy when they use anti-anxiety medications, more than is usually seen in younger people. Such effects may be exacerbated only when multiple medications are taken at the same time.

In fact, due to the changes that occur during biological aging, it is now known that drugs need to be clinically tested especially with older adults in mind. However, older adults are often excluded from clinical trials, which means that the safety and efficacy of drugs in this population are often unknown, with no supporting evidence.

“Inevitably, this lack of evidence has often led to inadequate drug treatment and, consequently, to various detrimental clinical outcomes,” according to a review published in March 2021 in European Geriatric Medicine.11

Why are so many older people taking antidepressants?

In the first study group, 4.2% of adults were taking antidepressants, but this jumped to 10.7% in a later study. During this time, the prevalence of depression decreased, but only slightly, from 7.9% to 6.8%.14 It is also worth noting that among older adults living in nursing homes, the prevalence of depression remained unchanged, but antidepressant use increased from 7.4% to 29.2%.15

Furthermore, antidepressants carry a risk of side effects that could easily turn into multiple medications. For example, antidepressant users have an increased risk of developing type 2 diabetes,16 and the use of antidepressants is associated with thicker arteries, which could contribute to the risk of heart disease and stroke.17

Nearly half of those over the age of 75 take statins

Cholesterol lowering drugs statins are another example of a group of over-prescribed drugs that contribute to the risks of polypharmacy. In the United States, close to 50% of adults in the United States over the age of 75 take a statin,18 although their use can also harm brain health – more than doubling the risk of dementia in some cases.19

Statins are often unnecessary at all. Although they are effective in lowering cholesterol, whether this is a drug to avoid heart disease and prolong life is the subject of heated debate. A scientific review in 2018 presented significant evidence that high LDL and total cholesterol are not an indicator of heart disease risk and that statin therapy is of dubious benefit as a form of primary prevention for this reason.22

Drugs are not equally good health

Excessive prescribing of tablets leads the elderly into a downward spiral of increased side effects and deteriorating health. A holistic approach is needed, one that addresses the key principles of good health and creates true wellness instead of trying to mask symptoms with multiple pills.

It is important to work with a doctor who understands the risks of polypharmacy and the fact that good health does not come from the pill. Only by building a health plan related to diet, exercise, sleep, emotional well-being and exposure to toxic substances, along with only targeted and truly needed medications and / or supplements, can you achieve optimal health.