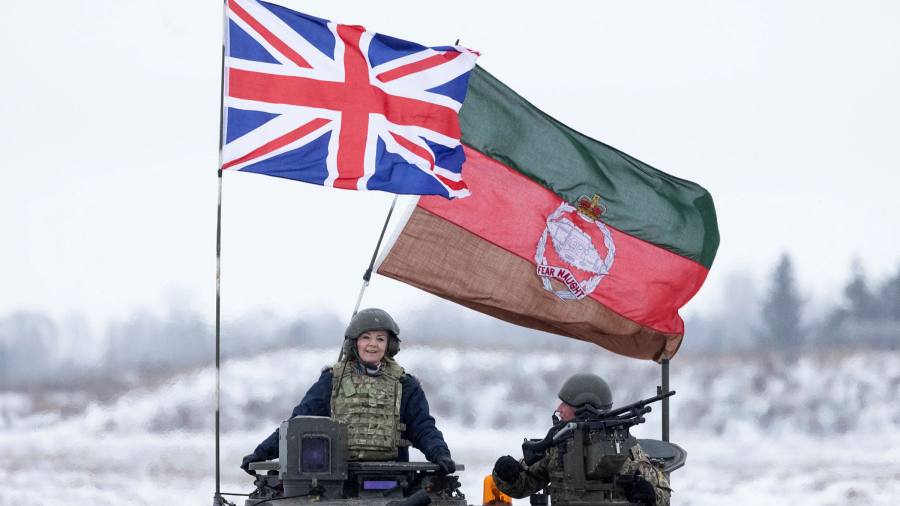 Boris Johnson is considering offering NATO another 900 troops to Estonia – which will double the size of British forces in the Baltic state – as tensions in the region continue to rise.

Estonia is a member of NATO – the Western Mutual Defense Pact – unlike Ukraine, which has been partially surrounded by Russian tanks and about 100,000 troops in recent weeks, sparking speculation about Moscow’s invasion.

British officials will be sent to Brussels to discuss a potential offer with NATO next week, while ministers will discuss military options on Monday.

One European official described the idea of ​​Western countries increasing their forces in Eastern Europe as a “purely defensive” mechanism for persuading NATO allies, rather than as a direct threat to Putin’s Russia. “These are not significant combat forces, they cannot be compared to the current construction of Russia.”

French President Emmanuel Macron has already offered to send hundreds of troops to Romania if NATO requests them, as part of the alliance’s “enhanced presence” program to protect its Eastern European members.

“I know the security situation is currently worrying on the eastern wing of Europe,” French Defense Minister Florence Parly said in Bucharest on Thursday when she repeated Macron’s offer. A French military mission arrived in Romania the same day to prepare for a possible deployment.

France and other NATO members have also stepped up their presence in the Black Sea in recent months. “We see a policy of denial of access by Russia,” said one French diplomat. “They use Crimea as a kind of permanent aircraft carrier.”

Johnson is also seeking talks with Vladimir Putin, the Russian president, in the coming days. The Prime Minister, who is at the center of a domestic political storm due to “partygate“He is expected to visit Eastern Europe next week.

A second time is planned in early February for Johnson to meet with fellow NATO members, although the location has not yet been confirmed.

The British Foreign Office is expected to announce a tightening of its sanctions regime on Monday – to allow Britain to target Russian interests – although officials have not yet revealed details.

Johnson said a potential deployment of more troops to Estonia would send a “clear message” to the Kremlin.

“We will not tolerate their destabilizing activity and we will always stand by our NATO allies in the face of Russian hostility,” he said.

“If President Putin chooses the path of bloodshed and destruction, it will be a tragedy for Europe. Ukraine must be free to choose its own future. “

The prime minister asked Foreign Minister Liz Truss and Defense Minister Ben Wallace to prepare for a visit to Moscow to hold talks with their counterparts. “They will be asked to improve relations with President Putin’s government and encourage de-escalation,” Downing Street said. Wallace will also hold meetings with allies in Hungary, Slovenia and Croatia next week.

Sir Tony Radakin, Chief of Defense Staff, will brief cabinet ministers on Tuesday on the situation in Ukraine.

The current British presence in Eastern Europe includes 900 military personnel in Estonia, 100 in Ukraine and 150 in Poland.

Downing Street said the aircraft carrier HMS Prince of Wales is on standby to leave “within hours” if needed.

Talks on the situation in Ukraine will be held on Monday at the UN Security Council in New York.