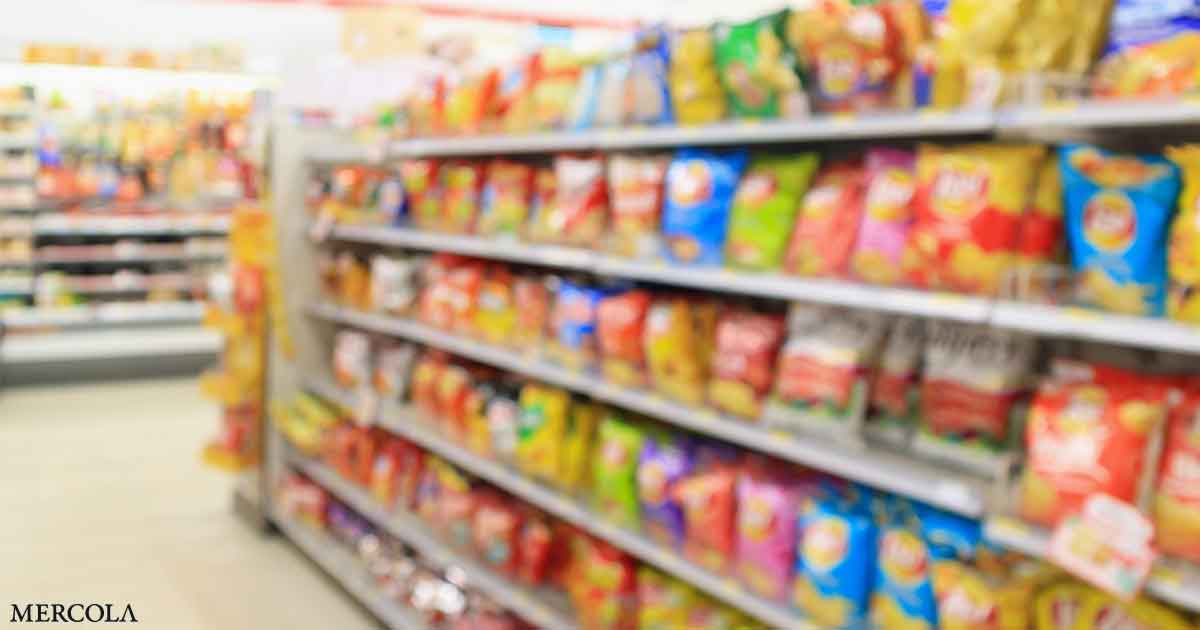 This article was previously published March 4, 2020, and has been updated with new information.

The struggle with weight gain and obesity is a common and costly health issue, leading to an increase in risk for heart disease, Type 2 diabetes and cancer, just to name a few.1

Obese individuals also have substantially higher medical expenses and indirect costs associated with lost productivity, transportation and premature mortality, and obesity is the reason why 1 in 3 fail to qualify for military service in the U.S.2

While the food industry has become notorious for funding anti-obesity programs that focus on physical activity, research clearly shows that processed foods, sugary beverages and high-carbohydrate diets are a primary concern. Sure, inactivity certainly contributes to the problem, but you cannot exercise your way out of a poor diet.

Processed vegetable oils, which are high in damaged omega-6 fats, are yet another reason why processed food diets are associated with higher rates of heart disease and other diseases.

Soybean oil, which is the most widely consumed fat in the U.S.,5 has been shown to play a significant role in obesity and diabetes, actually upregulating genes involved in obesity.6 Remarkably, soybean oil was found to be more obesogenic than fructose. It’s also been shown to cause neurological changes in the brain.7,8

Processed junk food destroys your metabolism and promotes obesity through a variety of mechanisms. Among them is the way these kinds of foods affect your appetite control. Several studies have also demonstrated that processed foods are addictive.

As detailed in “The Extraordinary Science of Addictive Junk Food,” your body is designed to naturally regulate how much you eat and the energy you burn. Food manufacturers have figured out how to override these intrinsic regulators, engineering processed foods that are “hyper-rewarding.”

According to the food reward hypothesis of obesity, processed foods stimulate such a strong reward response in our brains that it becomes very easy to overeat. One of the guiding principles for the processed food industry is known as “sensory-specific satiety.”

In a 2013 New York Times article, investigative reporter Michael Moss described this as “the tendency for big, distinct flavors to overwhelm your brain.”9 The greatest successes, whether beverages or foods, owe their “craveability” to complex formulas that pique your taste buds without overwhelming them, thereby overriding your brain’s satiety signals.

Potato chips are among the most addictive junk foods on the market, containing all three “bliss-inducing” ingredients: sugar (from the potato and sometimes additional sugars in the seasoning), salt and fat. And while food companies abhor the word “addiction” in reference to their products, scientists have discovered that sugar, in particular, is just that. In fact, sugar has been shown to be more addictive than cocaine.

Research10 published in 2007 showed 94% of rats allowed to choose between sugar water and cocaine chose sugar. Even cocaine addicted rats quickly switched their preference to sugar once it was offered as an alternative. The rats were also more willing to work for sugar than for cocaine.

The researchers speculate that the sweet receptors (two protein receptors located on your tongue), which evolved in ancestral times when the diet was very low in sugar, have not adapted to modern times’ high-sugar consumption.

As a result, the abnormally high stimulation created by sugar-rich diets generates excessive reward signals in your brain, which have the potential to override normal self-control mechanisms and thus lead to addiction and overeating.

“The findings suggest something is amiss in the hippocampus — a region of the brain that supports memory and helps to regulate appetite. When we are full, the hippocampus is thought to quieten down our memories of delicious food, thereby reducing our appetite. When it’s disrupted, this control can be seriously undermined.”

For this eight-day experiment, healthy volunteers between the ages of 17 and 35 with a body mass index14 between 17 and 26 (slightly underweight to mildly overweight) were instructed to eat:

On Days 1 and 8, the volunteers were given a toasted sandwich and milkshake for breakfast at the lab. The control group were given the same breakfast at the start and end of the study, but were instructed to eat normally during the remainder of the week.

On Days 1 and 8, participants also completed pre- and post-breakfast “wanting and liking tests,” in which they were first presented with six sugary breakfast foods and asked to rate how strong their desire to eat the food right now was. Next, they were instructed to consume the samples and rate how much they liked it, and how much more of it they thought they would be able to eat right then. As reported by the authors:15

“One week’s exposure to a WS-diet [Western-style diet] caused a measurable weakening of appetitive control, as measured by the two key ratings on the wanting and liking test.

Prior to the intervention, participants viewed palatable breakfast foods and judged how much they wanted to eat them, and then how much they liked their actual taste. This test was repeated after participants had eaten to satiety.

Across these pre- and post-meal tests, wanting ratings declined far more than ratings of taste liking. This manifestation of appetitive control — that is the expectation that food is less desirable than it actually tastes — changed in participants following the Western-style dietary intervention.”

If you eat a fast-food burger, you can easily take in close to half your daily caloric requirements. Add in fries and a soda and you may be nearing an entire day’s worth of required calories. However, you have not received the vitamins and minerals, the live enzymes and micronutrients, the healthy fats or high-quality protein that your body needs to function, let alone thrive.

This was recently demonstrated in a Swedish study,16,17 which found that the more added sugar your diet contains, the lower your micronutrient intake (i.e., vitamins and minerals).

To examine this relationship, the researchers examined dietary data collected in two Swedish population based studies (the National Swedish Food Survey and the Malmö Diet and Cancer Study).

Each individual’s added sugar intake was estimated by subtracting naturally-occurring fructose from the total sugar content of the diet as a whole. Energy intake for added sugar was then stratified into six groups:

They also calculated the intake of calcium, folate, iron, magnesium, potassium, selenium, vitamin C, vitamin D and zinc, finding an inverse relationship between added sugar intake and intakes of all nine micronutrients. According to the authors:18

“These findings suggest that in two Swedish populations the higher the intake of added sugar in the diet, the more likely it is that the intake of micronutrients will be compromised …

However, although the trends are significant and consistent with those obtained in other studies on the subject, future studies are needed in order to build the necessary scientific knowledge to establish a threshold of added sugar intake based on micronutrient dilution.”

When fast food meals are consumed day in and day out, for months and years on end, weight gain is virtually guaranteed, yet your body may still be starving and malfunctioning for lack of essential nutrients.

Depression Is a Junk Food State of Mind

Aside from promoting obesity, processed food and fast food diets have also been strongly linked to depression, especially in teens. In a 2019 study,19 researchers at the University of Alabama at Birmingham looked into the role diet plays in symptoms of depression.

To do that, they analyzed the excretion of sodium and potassium in the urine of 84 urban, low‐income adolescents. Higher levels of sodium in the urine can be an indication of a diet high in sodium, such as processed foods and salty snacks. A low level of potassium, meanwhile, is indicative of a diet lacking in fruits, vegetables and other healthy potassium-rich foods.

As expected, higher sodium and lower potassium excretion rates were associated with more frequent symptoms of depression at follow up 1.5 years later. “This study was the first to demonstrate relationships between objective indicators of unhealthy diet and subsequent changes in depressive symptoms in youth,” the authors wrote.20

It’s possible that eating foods high in sodium and low in potassium may lead to depression by negatively influencing neurotransmitters and neural function during a time that is particularly vulnerable.

“Given the substantial brain development that occurs during adolescence, individuals in this developmental period may be particularly vulnerable to the effects of diet on the neural mechanisms underlying emotion regulation and depression,” the researchers said.

In addition, poor diet could influence depression by disturbing the gut microbiome, which could further influence brain function. Past studies have also confirmed the diet-depression link among children and teens.

Adults may also suffer mentally from a diet based on unhealthy foods. A 2016 study23 found women who ate a proinflammatory diet (which can include one high in processed foods), were more likely to have recurring depressive symptoms, and a 2018 systematic review and meta-analysis,24 which looked at data from 101,950 participants, also found an association between a pro-inflammatory diet and risk of depression.

The Scourge of Ultraprocessed Food

Unfortunately, Americans not only eat a preponderance of processed food, but 60% of it is ultraprocessed25 — products at the far end of the “significantly altered” spectrum, or what you could typically purchase at a gas station.

Any food that isn’t directly from the vine, ground, bush or tree, is considered processed. Depending on the amount of change the food undergoes, processing may be minimal or significant. For instance, frozen fruit is usually minimally processed, while pizza, soda, chips and microwave meals are ultra-processed foods.

In addition to obesity, depression and other chronic health problems, ultra-processed foods will also shorten your life span. French researchers found that for each 10% increase in the amount of ultraprocessed food an individual consumed, the risk of death rose by 14%.27

This link remained even after taking confounding factors such as smoking, obesity and low educational background into account. The primary factors driving the increased death rate was chronic diseases such as heart disease and cancer.

In my view, eating a diet consisting of 90% real food and only 10% or less processed foods is an achievable goal for most that could make a significant difference in your weight and overall health.

Ultraprocessed foods should be kept to an absolute minimum and consumed only rarely. As noted in a 2016 study,28 “Decreasing the consumption of ultraprocessed foods could be an effective way of reducing the excessive intake of added sugars in the USA.” To get started, consider the following basics. Here are some ideas for making your own nutrition plan:

• Focus on fresh foods, ideally organic, and avoid as many processed foods as possible (if it comes in a can, bottle or package and has a list of ingredients, it’s processed).

You can eat an unlimited amount of nonstarchy vegetables. Because they are so low in calories, the majority of the food on your plate should be vegetables.

• Replace sodas and other sweetened beverages, including fruit juices, with pure, filtered water.

• Gradually reduce your eating window to six to eight hours with your last food intake at least three hours before bedtime.

• Stress creates a physical craving for fats and sugar that may drive your addictive, stress-eating behavior. If you can recognize when you’re getting stressed and find another means of relieving the emotion, your eating habits will likely improve.

The Emotional Freedom Techniques (EFT) can help reduce your perceived stress, change your eating habits around stress and help you create new, healthier eating habits that support your long-term health. To discover more about EFT, how to do it and how it may help reduce your stress and develop new habits, see my previous article, “EFT is an Effective Tool for Anxiety.”