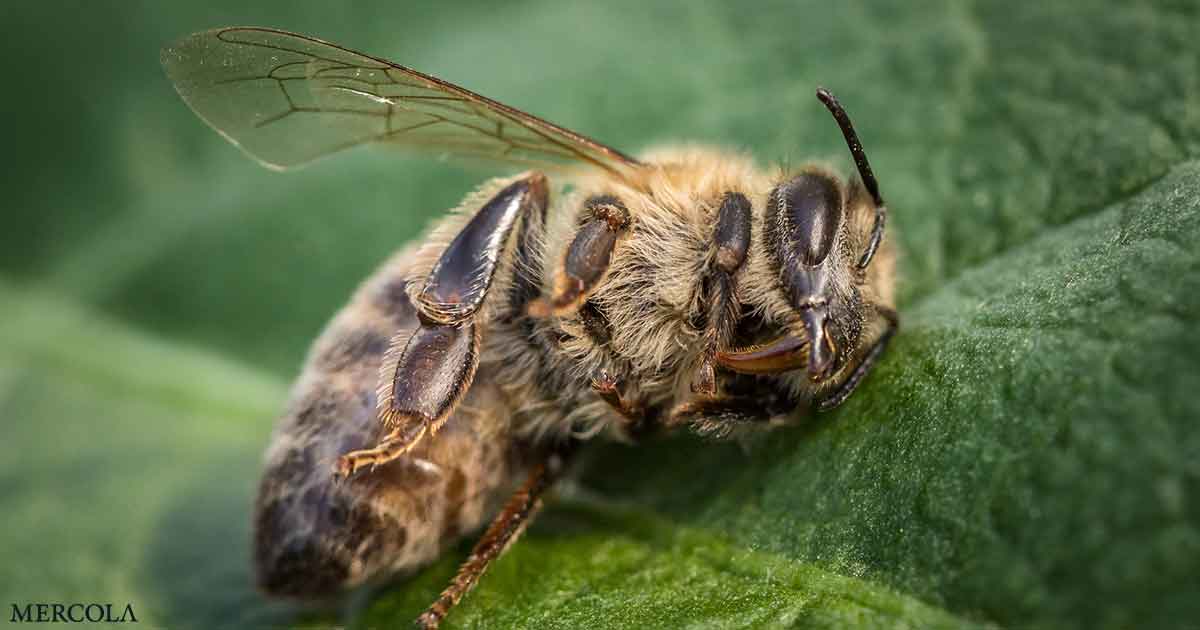 This article was previously published December 10, 2019, and has been updated with new information.

Unbeknownst to many Americans, a majority of soybean, corn, canola and sunflower seeds planted in the U.S. are precoated with neonicotinoid insecticides,1 also known as “neonics.” Needless to say, since the chemical is taken up systemically through the plant, it cannot be rinsed off.

A 2015 report2 by the American Bird Conservancy revealed neonics were found in congressional cafeteria food, demonstrating just how pervasive they have become in our food supply.

Wildflowers growing around the margins of fields are also severely contaminated with neonics, and the concentrations of the toxin in the pollen and nectar of these flowers are sometimes higher than the levels found in the crop itself.3

More than half of garden plants attractive to bees sold at garden centers — such as tomatoes, squash, salvia and various flowers — are also pretreated with these toxic pesticides.4,5 This is a travesty, as many add flowering plants to their garden to support the local pollinator population, not realizing their garden is actually contributing to the pollinators’ decline.

Neonicotinoids Are an Ecosystemwide Threat

Ironically, neonicotinoids were originally introduced as a safer alternative to other pesticides, yet studies over the years have repeatedly found the opposite to be true. As summarized in “The Environmental Risks of Neonicotinoid Pesticides: A Review of the Evidence Post 2013,” published in 2017:6

“Neonicotinoid pesticides were first introduced in the mid-1990s, and since then, their use has grown rapidly. They are now the most widely used class of insecticides in the world, with the majority of applications coming from seed dressings.

Neonicotinoids are water-soluble, and so can be taken up by a developing plant and can be found inside vascular tissues and foliage, providing protection against herbivorous insects.

However, only approximately 5% of the neonicotinoid active ingredient is taken up by crop plants and most instead disperses into the wider environment. Since the mid-2000s, several studies raised concerns that neonicotinoids may be having a negative effect on non-target organisms, in particular on honeybees and bumblebees …

Whilst much of the recent work has focused on the impact of neonicotinoids on bees, a growing body of evidence demonstrates that persistent, low levels of neonicotinoids can have negative impacts on a wide range of free-living organisms.”

“It is clear that these chemicals have the potential to affect entire food chains. The environmental persistence of the neonicotinoids, their propensity for runoff and for groundwater infiltration, and their cumulative and largely irreversible mode of action in invertebrates raise significant environmental concerns …”

‘Silent Spring’ All Over Again

While much attention has been given to the health and environmental dangers of widespread glyphosate use in modern agriculture, neonicotinoids are just as potent a threat. Neonics are powerful neurotoxins and, to bees, it’s 1,000 times more toxic than DDT.8

This class of insecticide has been identified as a leading cause of bee die-offs around the world, which in and of itself threatens the global food supply. As the treated seed grows into a plant, the chemicals travel systemically through the plant and kill insects that munch on their roots and leaves9 by attacking their nervous systems.

The pesticides are taken up through the plant’s vascular system as it grows, and, as a result, the chemical is expressed in the pollen and nectar of the plant. One of the observed effects in bees is a weakening of the bee’s immune system.10 Forager bees bring pesticide-laden pollen back to the hive, where it’s consumed by all of the bees.

About six months later, their immune systems fail, and they end up contracting secondary infections from parasites, mites, viruses, fungi and bacteria. The chemicals have also been shown to trigger immunosuppression in the queen bee,11 thus leading to the collapse of the hive.

Studies are now warning that birds feasting on insects killed by neonicotinoids are in decline,12 and researchers have also found that neonics can persist and accumulate in soils.

Since the chemicals are water-soluble, they leach into waterways where other types of wildlife may be affected. As noted in a 2013 scientific review13 of neonicotinoids, “the prophylactic use of broad-spectrum pesticides goes against the long-established principles of integrated pest management, leading to environmental concerns.”

Indeed, the European Union banned neonicotinoids for outdoor use in 2018 due to environmental concerns,14 specifically the chemicals’ impact on the bee population. A September 12, 2019, article15 in The Revelator discusses recent research showing neonics affect far more than its target species though, both directly and indirectly.16

According to the authors, “Although many members of the ecosystem may not be exposed to sufficient doses of insecticides to suffer acutely lethal poisonings, sublethal and indirect adverse effects have been demonstrated to occur.”17

The study18 also found that American agricultural land is now “48 times more toxic to insects than it was 20 years ago,” and that neonicotinoids accounted for 61% to 99% of the toxic load in 2014. Between 1992 and 2014, neonics accounted for 92% of the total acute insecticide toxicity load. According to the authors:19

“[O]ur screening analysis demonstrates an increase in pesticide toxicity loading over the past 26 years, which potentially threatens the health of honey bees and other pollinators and may contribute to declines in beneficial insect populations as well as insectivorous birds and other insect consumers.”

Research now shows neonicotinoids affect a number of species, including birds. One study,20 published in the journal Science September 13, 2019, concluded the insecticide affects the migration behavior of songbirds by affecting their feeding patterns and fat stores.

The same effects were found in a previous study,21 published in 2017. The chemicals basically act as an appetite suppressant, the researchers found. The birds also became lethargic. By reducing migration survival, the birds fail to successfully reproduce.

Strikingly, this effect was caused by the birds eating a minute amount of neonic-treated seeds. What’s more, the effect was remarkably rapid. As reported by National Geographic:22

“Each bird was weighed and its body composition measured before and after exposure. Birds given a higher dose of the pesticide had lost 6 percent of their body mass when weighed again six hours later.

The high dose given is comparable to a bird eating one-tenth of a single sunflower seed or corn seed treated with imidacloprid, or three or more wheat seeds, says co-author Christy Morrissey, an ecotoxicologist at the University of Saskatchewan.

‘It’s a minuscule amount, a tiny fraction of what these birds would eat daily,’ Morrissey said in an interview … Birds may suffer repeated exposure at successive stopover sites where they rest and feed. That may extend migration delays and their consequences.”

The Science study echoes results reported in renowned environmental toxicologist Pierre Mineau’s 96-page report,23 “The Impact of the Nation’s Most Widely Used Insecticides on Birds,” published in 2013. In it, Mineau reviews 200 studies on neonicotinoids, including industry research obtained through the U.S. Freedom of Information Act.

The report concludes that neonicotinoids “are lethal to birds and to the aquatic systems on which they depend.” Even more disturbing, contamination levels in both surface and ground water around the world are already beyond the threshold found to kill many aquatic invertebrates. According to this shocking toxicology assessment:

Neonics Used in Vain as They Provide No Benefit to Farmers

Making matters all the more tragic, studies have repeatedly shown neonicotinoids provide no significant benefit to farmers, so our food supply and environment are essentially being poisoned for no reason.

For example, an investigation24,25 by the U.S. Environmental Protection Agency published in 2014 found that treating soybean seeds with neonicotinoids provides no significant financial or agricultural benefits for farmers.

The researchers also noted there are several other foliar insecticides available that can combat pests as effectively as neonicotinoid seed treatments, with fewer risks.

As reported by Civil Eats26 in 2015, some studies suggest reducing the use of pesticides may actually reduce crop losses. The reason for this is because neonic-coated seeds harm beneficial insects that help kill pests naturally,27 thereby making any infestation far worse than it needs to be.

According to one such study,28 ecologically-based farming that helps kill soybean aphids without pesticides could save farmers in four states (Iowa, Michigan, Minnesota and Wisconsin) at least $239 million in losses each year.

Unfortunately, farmers have limited ability to avoid neonic-treated seeds due to the near-monopoly on seed. A small number of seed companies now control the entire industry, leaving farmers with few or no choices.29 Seed companies also limit the crop insurance a farmer can get when using untreated seed.

A 2019 meta-analysis30 by EPA scientists and economists published in Scientific Reports reached the same conclusion as in 2014: Neonicotinoid-treated soybean seed “provide negligible benefits to U.S. farmers.”

To reach this conclusion, they analyzed yield data from 194 randomized and replicated field studies performed in 14 states from 2006 through 2017. As reported by the authors:31

Across the entire region, combinations of management practices affected the effectiveness of FST + NST to increase yield but benefits were minimal ranging between 0.01 to 0.22 Mg/ha.

Despite widespread use, this practice appears to have little benefit for most of soybean producers; across the entire region, a partial economic analysis further showed inconsistent evidence of a break-even cost of FST or FST + NST.

These results demonstrate that the current widespread prophylactic use of NST in the key soybean-producing areas of the US should be re-evaluated by producers and regulators alike.”

Mounting Evidence Shows Neonicotinoids Are Too Toxic to Use

In 2013, the European Food Safety Authority released a report32 that ruled neonicotinoid insecticides (clothianidin, imidacloprid and thiamethoxam) are “unacceptable” for crops that are attractive to bees due to their adverse effects.

An independent review33,34 of 800 studies conducted by the International Union for the Conservation of Nature, published in 2015, concluded that neonicotinoids are gravely harming not only bees and other pollinators, but also birds and various soil and herbivorous invertebrates.

In a press release, one of the researchers, Jean-Marc Bonmatin with the National Centre for Scientific Research in France, said:35

“The evidence is very clear. We are witnessing a threat to the productivity of our natural and farmed environment … Far from protecting food production, the use of neonicotinoid insecticides is threatening the very infrastructure which enables it.”

It’s become quite clear, from toxicology studies and food testing, that our food supply is brimming with hundreds of toxic substances. Neonicotinoids are but one category of agricultural chemicals to contend with. This toxic load is a good reason in and of itself to opt for certified organic food whenever possible, including organic grass fed or pastured animal products.

Since decades’ worth of these toxins also pollute our waterways, including the sources of most if not all human drinking water, I also recommend investing in a good water filtration system for your home to ensure you are drinking the purest water possible.

Additional recommendations to limit your exposure to toxic pesticides, herbicides and insecticides include growing your own food — even those with a studio apartment or a dorm room can easily grow sprouts that can serve as a large percentage of the organic vegetables you eat — and detoxifying your lawn and garden.

If you have a lawn care service, make sure they are not using toxic chemicals. Also, avoid using toxic chemicals to control pests and weeds in your garden, and be sure the plants you add are not pretreated with neonics. You may also want to check on your child’s school pest control policy. If they have not already done so, encourage your school district to move to Integrated Pest Management, which uses less toxic alternatives.