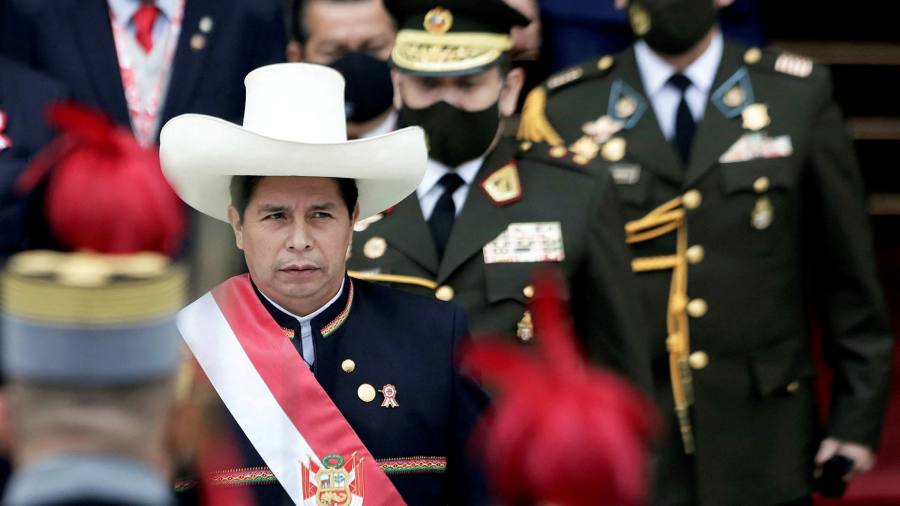 Peru’s embattled leftwing president Pedro Castillo announced the third cabinet of his turbulent six months in office on Tuesday, naming a new prime minister and replacing all his top ministers.

The move comes after a chaotic week in which his prime ministerfinance minister and interior minister all quit amid allegations that Castillo lacks leadership and has done little to crack down on corruption in his administration.

Castillo, a former primary school teacher who was elected last year despite having no experience in public office, must now put his heavily reshuffled cabinet to the opposition-controlled congress for a vote of confidence.

Whether he wins approval for it or not, the 52-year-old president is likely to face further challenges to his rule in the coming months, including possibly attempts at impeachment. He has already survived one such attempt.

In a ceremony on Tuesday night, Castillo swore in a cabinet with 10 changes, including new ministers of finance, foreign affairs, interior, defense and mining.

The new prime minister is Héctor Valer, a 62-year-old lawyer who has flitted between political parties during his career and who was elected to congress for the first time last year. He has no ministerial experience.

Oscar Graham will head the finance ministry. He is an economist with years of experience at the ministry and the central bank. He replaces Pedro Francke, who resigned earlier in the day.

Francke was seen as one of the more experienced and moderate members of Castillo’s team. Graham’s appointment should go some way to calming any market jitters arising from his departure.

The new mining and energy minister – the third of Castillo’s tenure – is Alessandra Herrera, a lawyer with public administration experience but few links to the private sector. Mining is the lifeblood of the Peruvian economy.

Castillo’s government has been plagued by chaos, resignations and scandals from day one. He has made more than 20 ministerial changes in six months. He has also sacked the head of the police force, clashed with senior military officers and seen various government advisers quit.

The turbulence has dragged on the economy and weakened the currency, the sol.

The president has been criticized for flip-flopping on policy and for making statements he has later had to retract or qualify.

Mirtha Vásquez, in her resignation letter on Monday from her post as prime minister, said it was no longer possible to find a consensus within the cabinet. In a clear swipe at the president, she hit out at “the executive”, saying that “doubts and indecision are unacceptable”.

Earlier on Tuesday, a secretary to the presidency quit, and in a scathing resignation letter described “the absence of an organized system of work” from the start of Castillo’s presidency. The secretary said the government was plagued by “disorder” and “a lack of rigor in complying with rules”.

Castillo was propelled to power in last year’s elections by Free Peru, a Marxist party that adopted him as its candidate even though he seemed to have little in common with it ideologically.

In his time in office he has been torn between appointing Free Perú ideologues to positions of power and trying to appease more moderate leftwingers.

In theory he still has four and a half years left as president but many analysts believe he will not last the full term. Peru cycled through four presidents in a tumultuous five years between 2016 and the 2021 elections.