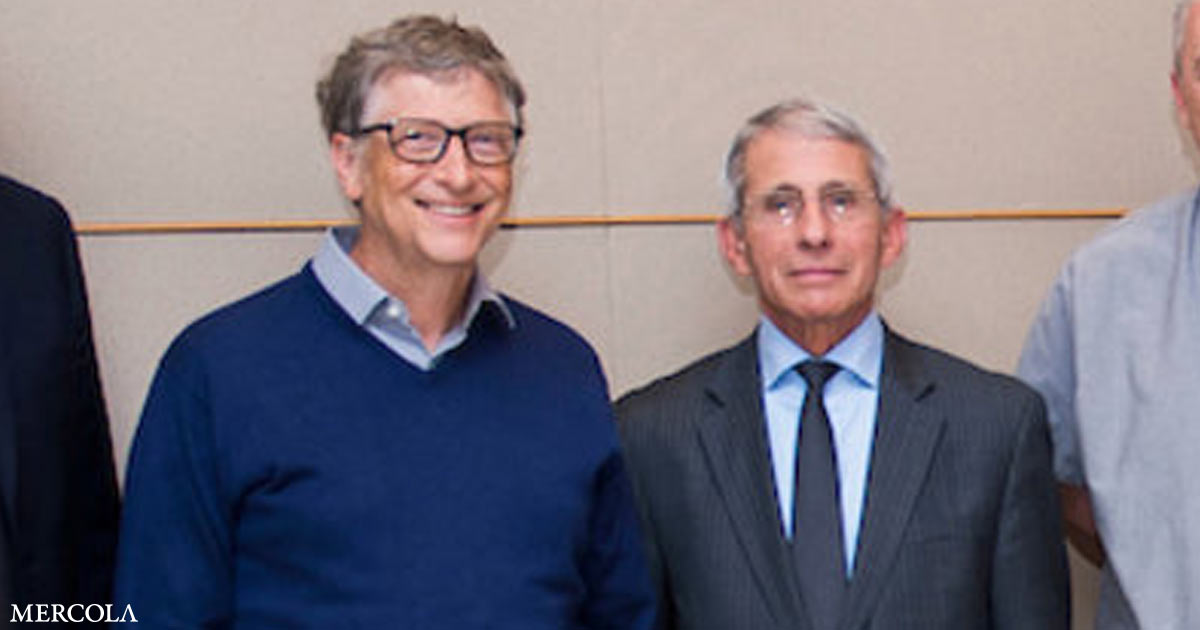 Bill Gates and Anthony Fauci have become well-known names in the United States, and their mostly excellent reputation is protected by extremely biased press. Less well known is the deep partnership between the two – culminating in a terrifying public-private partnership that has incredible power over the American public, along with global health and food policy.

You can read all the details in Robert F. Kennedy Jr.’s bestseller, “The Real Anthony Fauci,” which contains more than 2,200 footnotes supporting his data. It reveals the connection between Gates and Faucius, as well as how Gates shaped his rise to control after the empire of John Rockefeller.

Gates now contributes to the WHO in a number of ways, including the Bill & Melinda Gates Foundation (BMGF) as well as GAVI, which was founded by the Gates Foundation in partnership with the WHO, the World Bank, and various vaccine manufacturers. Together, this makes Gates the first sponsor of the WHO.

Inspired by Rockefeller’s business model, Bill and Melinda Gates donated $ 36 billion worth of Microsoft shares to BMGF between 1994 and 2018. Gates also created a separate entity, Bill Gates Investments (BGI), which manages his personal wealth and his foundation’s corps.

Gates strategically targets BMGF’s charitable gifts to give him control over international health and agricultural agencies and the media, allowing him to dictate global health and food policy to increase the profitability of large multinational companies in which he and his foundation hold large investment positions.

As was the case with Rockefeller, whose wealth only grew after his Standard Oil Company was forced to split into 34 different companies, Gates ’strategic gifts only increased his wealth. Gates ’personal net worth rose from $ 63 billion in 2000 to $ 129.6 billion in 2021.1 his fortune increased by $ 23 billion during quarantine 2020 alone.2

How Gates controls the WHO

How does a private citizen, not an elected official, gain so much control over a global health agency like the WHO? When it was established, the WHO could decide how to distribute its contributions. Now 70% of its budget is tied to specific projects, countries or regions, which are dictated by financiers.3 As such, Gates’ priorities are the backbone of the WHO, and it was no coincidence that he told the WHO, “Our priorities are your priorities.”4

Since 2018, cumulative contributions from the Gates Foundation and GAVI have made Gates “an unofficial major sponsor of the WHO, even before the Trump administration’s 2020 move to reduce all his support for the organization,” according to Kennedy. “In addition, Gates is also channeling funds to the WHO through SAGE [Strategic Advisory Group of Experts] and UNICEF and Rotary International, bringing its total contribution to more than $ 1 billion. ”

These tax-deductible donations give Gates influence and control over international health policy, “which it mainly directs to serve the profits of its pharmaceutical partners.”

Furthermore, “Gate’s obsession with the vaccine has diverted the contributions of the WHO program from alleviating poverty, nutrition and clean water to make the vaccine a major indicator of public health. And Gates is not afraid to shed his weight, ”Kennedy said. “… The sheer size of his foundation’s financial contributions has made Bill Gates an unofficial – albeit unelected – leader of the WHO.” Gates’ power was further enhanced by his decades-long partnership with Faucius.

Alone, both Gates and Fauci possess immense power in their fields. Together, they are a huge, though sadly vile, force.

As director of the National Institute of Allergy and Infectious Diseases (NIAID) – part of the US National Institutes of Health (NIH) – “Fauci has a budget of $ 6.1 billion that distributes to colleges and universities to research drugs for various diseases,” says Kennedy. “There’s another $ 1.7 billion coming from the military for biological weapons research.”5

Herein lies Fauci’s power: in his ability to finance, arm, pay, maintain, and effectively deploy a large and widespread army. The NIH alone controls an annual budget of $ 37 billion spread over more than 50,000 grants that support more than 300,000 positions globally in medical research.6

Thousands of doctors, hospital administrators, health professionals and virologists whose positions, careers and salaries depend on AIDS dollars coming from Dr. Fauci, Gates and the Wellcome Trust (UK version of the Gates Foundation) are officers and soldiers in the mercenary army that works to defend all vaccines and doxology Dr. Fauci for HIV / AIDS.

Together with Gates, Fauci had the power to influence the funding of the American side of aid to Africa for AIDS, giving it priority vaccines and medicines over nutrition, sanitation and economic development. Yet Fauci and his team, funded by Gates, have never created a vaccine for AIDS, despite squandering billions of dollars and causing countless human massacres. In 2020, many Gates / Fauci HIV vaccine trials in Africa suddenly became COVID-19 vaccine trials.7

As explained in Kennedy’s book, HIV has provided Gates and Fauci with a position in Africa for their new brand of medical colonialism and a means for partners to build and maintain a strong global network that includes heads of state, health ministers, international health regulators, WHO, World the Bank, the World Economic Forum, key financial industry leaders and military officials who have served as the command center of the growing biosafety apparatus.

Their infantry were an army of virologists, vaccinologists, clinicians, and hospital administrators who relied on their generosity and acted as ideological commissioners in the community in this crusade.

On April 1, 2020, Fauci spoke to Gates by phone, according to emails published in 2021. Fauci referred to a phone call in an email to Emilio Emini, director of the Gates Foundation’s tuberculosis and HIV program, stating: “As I had mentioned Bill last night, I am delighted to move towards a common and hopefully a synergistic approach to COVID-19. ”8

The email was part of 3,000 emails received through the FOIA’s public records request from the Informed Consent Action Network (ICAN). Despite not having a medical degree, Gates has been granted direct access to top state health officials, who consider him an authority on public health. In June 2021, the Daily Mail reported:9

“The Gates Foundation has committed at least $ 1.75 billion to global efforts to combat the pandemic – an amount that has opened the door to the highest levels of government. After Fauci’s telephone conversation with Gates, the executive director of the Gates Foundation, Emini, sent him an e-mail to answer and ask “how can we coordinate and inform each other’s activities.”

“There is an obvious need for coordination between the various primary funders or the focus we need to have given the state of the pandemic will be lost through uncoordinated activities,” Emini wrote.

Fauci also said he would facilitate a conversation between Emini and the Directorate for Advanced Biomedical Research and Development (BARDA),10 which provides funding for vaccine and drug development, promoting “advanced development of medical countermeasures to protect Americans and respond to threats to 21st century health security.”11 The Daily Mail continued:12

“The Gates Foundation’s partnership with BARDA has resulted in at least one joint funding project. In June 2020, Evidation Health announced that BARDA and the Gates Foundation were funding efforts to ‘develop an early warning algorithm to detect COVID-19 symptoms’.

It is unclear whether the alert system was ever launched, and Evidation did not make further statements about the project after the first release. Other published emails … clearly show that the Gates Foundation has remained actively involved in responding to the NIH pandemic. ”

The Fauci-Gates partnership has led to $ 1 billion in increased funding for Gates ’global vaccine programs, even though the NIH budget itself has experienced little growth.13 However, long before a phone call in April 2021, Kennedy’s book reveals that Fauci and Gates met in person, shaking hands in 2000 in an agreement to control and expand a global vaccine company.

Why haven’t you heard of this yet?

When you are one of the richest people in the world, you can buy almost anything you want – including control over the media so that they print only affordable printing. If you have enough money – and Gates certainly has it – you can even get it from big media companies like ViacomCBS, which runs MTV, VH1, Nickelodeon and BET, among others, to insert your approved PSAs into their programs – and BMGF has.14

Through more than 30,000 grants, Gates has contributed at least $ 319 million to the media, revealed Alan MacLeod, senior expert writer for MintPress News.15 From journalists ‘and journalists’ associations to journalism training, Gates is a comprehensive custodian of the press, making truly objective reporting on Gates himself – or his many initiatives – virtually impossible.16

In an interview with MintPress News, Linsey McGoey, a professor of sociology at the University of Essex, UK, explained that Gates’ philanthropy has a price:17

“Philanthropy can and is deliberately used to divert attention from the various forms of economic exploitation that today support global inequality.

The new ‘philanthropic capitalism’ threatens democracy by increasing the power of the corporate sector at the expense of public sector organizations, which are increasingly facing budget constraints, in part due to over-rewarding for-profit public service organizations that could be delivered cheaper without private sector involvement. “

He echoed the sentiment of Kennedy, who believes Fauci and Gates should be investigated for the crimes. In an interview, he said billionaires are in collusion with the media, corporations and politicians to increase their enormous wealth:18

“The most important productive strategy or big story about oligarchs and intelligence agencies and pharmaceutical companies trying to impoverish us and wipe out democracy is their strategy of creating fear and division.

So orchestrate fear, divide Republicans from Democrats and blacks from whites, and get involved in big fights so that no one notices that they are making billions and billions, while impoverishing the rest of us and carrying out a controlled overthrow of American constitutional democracy. ”

For more details on how the Fauci-Gates-Pharma alliance is advancing its totalitarian control program, using unfathomable power and greed – all under the guise of a pandemic – read “The Real Anthony Fauci”.