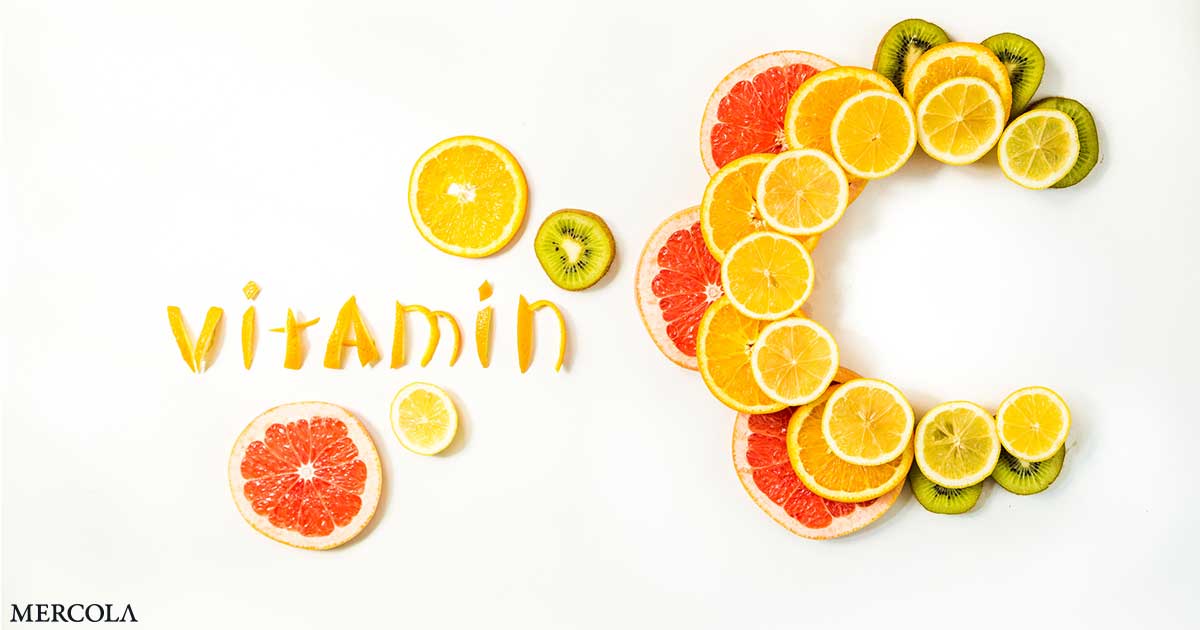 This article was previously published June 6, 2020, and has been updated with new information.

Vitamin C, a water-soluble vitamin found in abundance in fruits and vegetables, is an essential nutrient that humans must get from their diet or supplements. Also known as ascorbic acid, vitamin C is perhaps the most well-known for its antioxidant properties – properties it maintains because of the ability to donate electrons to oxidized molecules.

In the video above, Rhonda Patrick, Ph.D., discusses vitamin C in-depth, covering everything from its effects on immune function and viral infections to the bioavailability of different vitamin C forms and administrations, such as oral or intravenous – plus much sea. If you have any interest in learning how vitamin C can benefit your health, this video is a must-see.

Vitamin C’s Many Roles in Your Health

Vitamin C, even in small quantities, protects proteins, lipids and even DNA and RNA in your body from reactive oxygen species that are generated during normal metabolism as well as due to toxin exposure (such as cigarette smoke and air pollution).

Vitamin C is also involved in the biosynthesis of collagen, carnitine and catecholamines, according to Patrick, and as such, “vitamin C participates in immune function, wound healing, fatty acid metabolism, neurotransmitter production, and blood vessel formation, as well as other key processes and pathways. “1

Intravenous (IV) vitamin C has also shown promise in helping to treat viral infections and cancer, while vitamin C is also involved in the way your body processes other vitamins, such as vitamin E, which it regenerates from its oxidized form. Vitamin C also makes iron from dietary sources more bioavailable because it enhances gut absorption of nonheme iron.2

Vitamin C’s role in immune function is worthy of attention. “It stimulates the production of white blood cells, especially neutrophils, lymphocytes and phagocytes, and promotes the cells’ normal functions, such as their ability to detect, move toward and engulf pathogens,” according to Patrick.3

Vitamin C also acts as an antioxidant within your cells, helping to protect immune cells from incurring damage, and may promote the production of interferon, which helps defend against viruses.

There’s also evidence that vitamin C may help in some cases of exercise-induced immune dysfunction. While exercise is generally beneficial for immune function, over-exercise or repeated high-intensity training can take a toll on the immune system. In the case of marathon runners, skiers and soldiers, for instance, those who used supplemental vitamin C had 50% fewer colds.4

Vitamin C’s anti-cold effects are among its most-studied uses, and research suggests that using vitamin C prophylactically as well as therapeutically at the onset of cold symptoms may reduce symptoms and cold duration.5 It may also be useful against COVID-19.

In my March 17, 2020, interview with Dr. Andrew Saul, editor-in-chief of the Orthomolecular Medicine News Service, he mentions being in contact with a South Korean medical doctor who is giving patients and medical staff an injection of 100,000 IUs of vitamin D along with as much as 24,000 mg (24 grams) ) of vitamin IV C. “He’s reporting that these people are getting well in a matter of days,” Saul says.

As explained by Saul, vitamin C at extremely high doses acts as an antiviral drug, actually killing viruses. While it does have anti-inflammatory activity, which helps prevent the massive cytokine cascade associated with severe SARS-CoV-2 infection, its antiviral capacity likely has more to do with it being a non-rate-limited free radical scavenger.

Further, vitamin C is well known for helping with lung defense, which takes on renewed meaning in the midst of the COVID-19 pandemic. According to Patrick:7

“The innate immune system of the lungs is an integral component of the body’s defense system, protecting the body against exposure to inhaled oxidants and pathogens… Vitamin C’s lung defense capacity is evidenced by robust data suggesting that vitamin C intake protects against chronic obstructive pulmonary disease , pulmonary fibrosis, and other respiratory illnesses, including lung cancer.

But this characteristic takes on special relevance in light of recent concerns about complications associated with COVID-19, such as pneumonia and acute lung injury, which often necessitate mechanical ventilation support.

Epidemiological and observational data indicate that higher vitamin C intake is associated with a lower risk of developing pneumonia, and the vitamin has also been proven to be effective at decreasing the duration for which patients are kept on mechanical ventilation, especially among patients requiring more than 24 hours of breathing support. “

Vitamin C also leads to improved quality of life for cancer patients. In one study of 39 patients diagnosed with terminal cancer, IV vitamin C led to improvements in physical, emotional and cognitive status as well as reductions in fatigue, nausea, vomiting, pain and appetite loss.9

Since conventional cancer therapies often lead to significant side effects, including physical, emotional, cognitive and sexual impairments, using vitamin C as an adjunct to improve the quality of life can be a significant improvement.

Vitamin C also shows promise as a treatment for ischemia and perfusion injury, which can occur following a heart attack or stroke, leading to increased inflammation and oxidative damage. “Vitamin C might be effective at reducing myocardial injury in part by mitigating oxidative stress,” Patrick explained.11 In your brain, vitamin C is also essential. According to Patrick:12

“Vitamin C is found in high concentrations in the brain, especially in the hippocampus and frontal cortex regions – areas involved in memory consolidation, learning, and aspects of executive function.

In fact, in a classic example of the body’s triaging resources based on needs, the brain retains vitamin C during times of deficiency at the expense of other tissues. This is critical to our survival: Evidence suggests that vitamin C plays roles in the brain throughout the lifespan from development through older age. “

Due to vitamin C’s antioxidant properties, it may help reduce the risk of neurodegenerative conditions such as Alzheimer’s disease, Parkinson’s disease, Huntington’s disease and multiple sclerosis because it reduces oxidative damage. “Vitamin C is also important for the regulation of neurotransmitters, the formation of neural circuits, and many other key brain functions,” Patrick says.13

Vitamin C as a ‘Cure-All’

Patrick describes double Nobel Prize laureate Dr. Linus Pauling’s 1970 publication on vitamin C and the common cold as the impetus that brought vitamin C into the realm of a cure-all in the minds of the general public. While this is an exaggeration – vitamin C can’t cure everything – it’s truly remarkable how many different conditions appear to be benefited by vitamin C. Aside from being an antioxidant and anti-infective agent, Patrick describes vitamin C’s benefits for:

There are differences in the bioavailability of vitamin C depending on its form. Both frequency and dose of vitamin C will affect your levels, but so too will taking it in oral or IV form.

“For example, oral vitamin C is absorbed in the small intestine via specialized transporters that are subject to saturation, but intravenous vitamin C bypasses the gut, achieving blood and tissue concentrations that are markedly higher than those achieved with the oral form,” Patrick explains. .14

Vitamin IV may lead to blood concentrations up to 70 times higher than an equivalent oral dose.15 That being said, liposomal vitamin C, in which vitamin C is encapsulated in a lipid particle, may increase the bioavailability of oral vitamin C considerably.

The average peak plasma concentration of vitamin C in the participants who took the free form was approximately 180 micromoles per liter of blood. However, among those who took the liposomal form, the average peak plasma concentration was 300 micromoles per liter of blood, a 70 percent difference, “she said.17

I strongly believe that liposomal vitamin C is a must for your medicine kit to be pulled out for acute viral illnesses. If I were to become acutely ill, I would take 4 grams of liposomal vitamin C every hour until feeling better, then start decreasing the dosage slowly over a few days once symptoms improve.

I personally only take 100 milligrams (mg) of vitamin C supplement and only when I don’t have regular access to fresh acerola cherries. I have several trees on my property that usually have a harvest every few weeks for nine months of the year. Each cherry has 80 mg of vitamin C, so I can easily get up to 10 grams on days that I eat the cherries.

A wide variety of foods are high in vitamin C, including red pepper, parsley, broccoli, kiwi, strawberries, guava, tomato and all citrus fruits. You can get significant amounts of vitamin C from your diet if you eat these foods on a daily basis.

Keep in mind, however, that cooking destroys about 25% of the vitamin C present in foods.18 Fortunately, many vitamin C-rich foods are commonly eaten raw. If you’re healthy, or have only mild illness, you can certainly use these types of whole foods, and they may even be preferable, but if you want to treat illness, your best bet is to use vitamin C in supplement form, either liposomal or IV. Further, according to Patrick:19

It is noteworthy that some scientists believe that compelling evidence supports increasing the RDA for vitamin C to 200 milligrams per day for adults. Whereas the goal of the current recommendations is to reduce the risk of scurvy, higher intake could saturate tissue levels, potentially reducing the risk of chronic conditions such as heart disease, stroke, cancer, and metabolic dysfunction. “

Certain populations, including people who smoke, consume alcohol or have inflammatory bowel disease, may need increased intake of vitamin C, but some research suggests vitamin C deficiency may be more common than realized.

“Interestingly, a population-based cross-sectional study of nearly 150 patients admitted to a large teaching hospital in Canada found that 60 percent of patients had suboptimal plasma vitamin C levels and 19 percent were deficient, with levels approaching those associated with scurvy, “Patrick noted.20 It’s clear that vitamin C is one nutrient everyone should be sure to get enough of, but if you’re acutely ill, vitamin C becomes even more important.

“Vitamin C might be especially beneficial for critically ill people, particularly those with viral infections, who commonly have lower blood levels of vitamin C compared to healthy people,” Patrick says. So in addition to eating plenty of vitamin C-rich foods daily, keep vitamin C in mind during times of illness. Fortunately, Patrick adds, “With some exceptions, oral and intravenous vitamin C supplementation have been shown to be safe, well-tolerated, and have low toxicity.”21