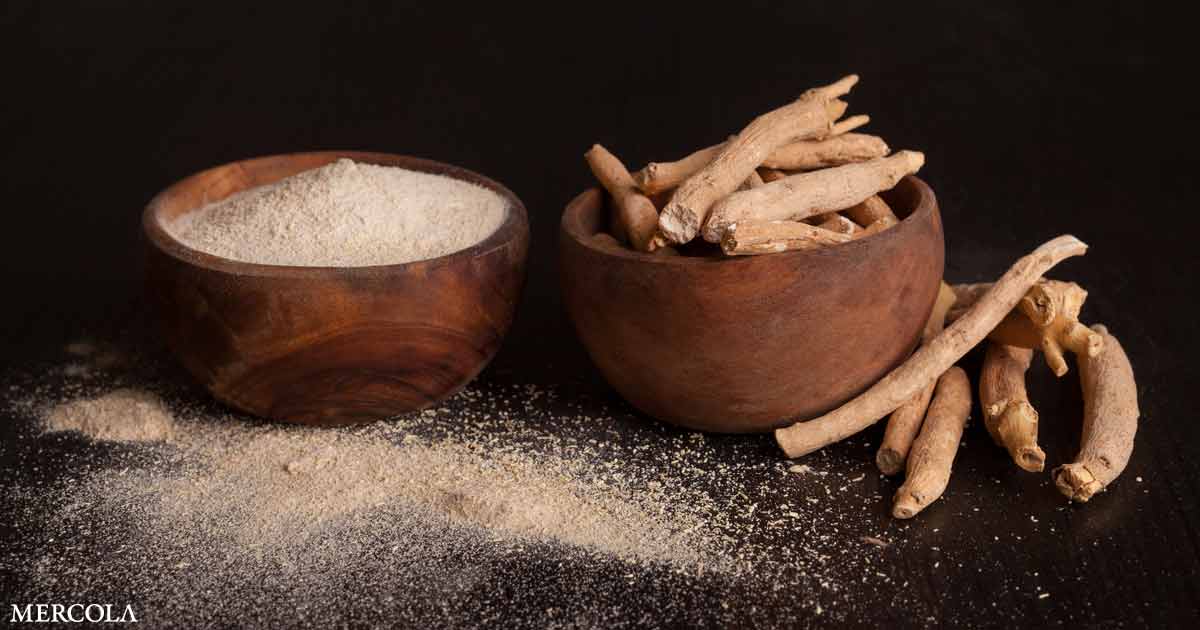 This article was previously published on October 29, 2020 and has been updated with new information.

Ashwagandha (Withania somnifera) is a powerful adaptogenic plant, meaning it helps your body adapt to stress1 balancing your immune system, metabolism and hormonal system. It is known as a multi-purpose plant and was used in ancient Ayurvedic and Chinese medicine.2 The plant is native to India and is a member of the Solanaceae family, along with eggplant and tomato.3

A 2020 study tested ashwagandha on its ability to promote sleep. Based on the results, scientists believe the plant could be an alternative remedy for insomnia.4 They gathered 80 participants, of whom 40 were healthy people without sleep disorders and 40 with a known diagnosis of insomnia.

The results showed that groups of healthy individuals and those with insomnia who took ashwagandha showed a significant improvement in research parameters. Those who had insomnia showed the most improvement. The researchers wrote that all participants tolerated the root extract well, regardless of their health condition and age.5

Participants took 300 milligrams (mg) twice daily of KSM-66 root extract sold by Ixoreal Biomed.6 The same supplement was tested in another study in which scientists found that it improves sleep quality, quality of life and mental alertness in the elderly.7

Researchers in another study suggested that root extract could be effective in the elderly population because it tolerated the supplement well and “study participants reported it to be safe and beneficial.”8 Kartikeya Baldwa, CEO of Ixoreal Biomed Inc., commented on the results of the latest study to NutraIngredients:9

“Sleep is crucial for health, for recovery from exercise and for optimal functioning both physically and cognitively. Ashwagandha root has been mentioned for centuries for its sleep benefits. This study is the first clinical study to evaluate the effect of ashwagandha root extract on quality sleep in healthy adults. and in patients with insomnia and shows significant positive effects on sleep quality in participants.

The paper was published in a prestigious journal and is a valuable contribution to the scientific literature. It confirms the use of ashwagandha root extract as an adaptogen that helps reduce anxiety and promotes restful sleep. “

Why it is important to improve the quality of sleep

The importance of getting enough quality sleep every night cannot be overstated. You probably recognize that a good sleep schedule is a vital component of a healthy lifestyle. But according to Mattress Firm research, which revealed some disturbing facts about sleep patterns in America, a good night’s sleep can be a challenge.10

The results showed that the average adult who responded to the survey did not receive seven to eight recommended hours of sleep each night. Of those who responded, a total of 40% said their sleep was “not very good” or “not good at all”. This may be related to activities that people reported doing in bed, which included watching television, eating, and playing video games.

But it is not only the number of hours that is important, but also the quality. Fragmented sleep can trigger chronic inflammation and contribute to mental health conditions and neurological disorders such as major depression and Alzheimer’s disease.11

Fragmented sleep has also been linked to atherosclerosis,12 accumulation of fatty deposits in the arteries sometimes referred to as clogged or hardened arteries which can result in fatal heart disease.13

Experts estimate that up to 70 million people in the U.S. of all ages suffer from sleep-related health problems.14 They are common in both men and women and cover all socioeconomic classes. The potential for sleep deprivation has increased significantly in the last 30 years, according to the American Sleep Apnea Association.

Contributing factors include digital technology and blurred boundaries between work and home. This could be exacerbated by the recent pandemic and the growing number of people working remotely.

In addition to improving sleep quality, the researchers found that ashwagandha reduced a measure of anxiety in participants.15 According to the American Association for Anxiety and Depression, there is a link between stress and anxiety. They define difference as stress as a response to a threat, while anxiety is a response to stress.16

They brought together 64 people who had a history of chronic stress. Prior to the start of the intervention, participants underwent laboratory testing that included measurement of serum cortisol and assessment of stress levels using a standardized assessment questionnaire.

The group was randomized into a treatment group and a control group. Those in the study group took 300 mg of ashwagandha root twice daily for 60 days. Analysis of the data showed a significant reduction in stress assessment at the end of 60 days compared with the placebo group.

People taking ashwagandha also had significantly lower serum cortisol levels. The group taking ashwagandha reported only mild side effects that were comparable to the placebo group. The results led the researchers to conclude that the root extract is safe and effective in improving stress resistance and self-assessed quality of life.

A systematic review of the literature evaluating five human trials showed similar results as the intervention study. The researchers concluded that each of the five studies showed that ashwagandha resulted in greater improvement than placebo in measuring anxiety or stress.18

A non-restorative dream is a subjective feeling that you have that your dream was “insufficiently refreshing”.19 This can happen despite the fact that it looks like you’ve slept through the night. It is one of the symptoms of insomnia that can be independent of other signs.

Difficulties with non-restorative sleep play an important role in medical conditions such as fibromyalgia, chronic fatigue syndrome, heart disease and obesity.20 Scientists have found that it is associated with other sleep disorders such as restless legs syndrome, sleep apnea and occasional limb movement disorders.

Although studied in people with sleep disorders, one team of researchers published their research protocol and rationale for assessing the role that ashwagandha may play in non-restorative sleep in the general population.21

Because non-restorative sleep plays an important role in medical conditions associated with chronic inflammation, and ashwagandha has shown the ability to reduce stress and prepare for sleep, researchers hoped ashwagandha would help improve scores on the sleep recovery questionnaire given to participants who took allowance for six weeks.

The results of the study were published in the journal Sleep Medicine. The researchers included 144 people who completed the study and found that there was a 72% improvement in sleep quality in those taking ashwagandha compared to 29% in the placebo group.22

The researchers followed data that showed a significant improvement in sleep efficiency, time, latency and wakefulness after sleep. Quality of life scores have improved significantly in the physical, psychological and environmental domains. In addition, no adverse events were reported.

The traditional use of ashwagandha is to improve memory, especially the roots of the plant. In 2017, a study published in the Journal of Dietary Supplements showed that root extract helped improve memory and cognitive function in 50 people who had mild cognitive impairment.23

This is a mild decline in cognitive ability associated with an increased potential risk for developing other serious dementias, including Alzheimer’s disease.24 Participants were divided into two groups that received 300 mg of ashwagandha root extract twice daily or placebo for eight weeks.

“The beneficial effects of Ashwagandha root ingredients in neurodegenerative diseases may be due to their action on neurites, antioxidants, anti-inflammatory, anti-apoptotic and anxiolytic effects, as well as their ability to improve mitochondrial dysfunction and restore energy levels and increase antioxidant defenses. such as reduced glutathione. “

Another study included 20 healthy men who were randomized to receive 500 mg of encapsulated ashwagandha root and leaf extract or placebo for 14 days.27 They underwent a series of computerized psychometric tests and the researchers found that those taking ashwagandha showed significant improvements in reaction time, card sorting testing, and discrimination discrimination.

Considerations and side effects

If you decide to consider an ashwagandha supplement, talk to your doctor about holistic health care because even natural remedies, such as herbs, may interact with other medications or supplements you may be taking.

Women who are pregnant or breastfeeding should avoid ashwagandha as it can cause spasmolytic activity in the uterus which can result in premature birth. In general, ashwagandha is associated with only mild side effects, if any, and seems to be safe for most people.

Typical doses can range from 125 mg to 1250 mg each day. Many of the current studies provided participants with 600 mg of root extract each day. In addition to being taken internally, ashwagandha can also be useful in topical form as an essential oil diluted with essential oil.