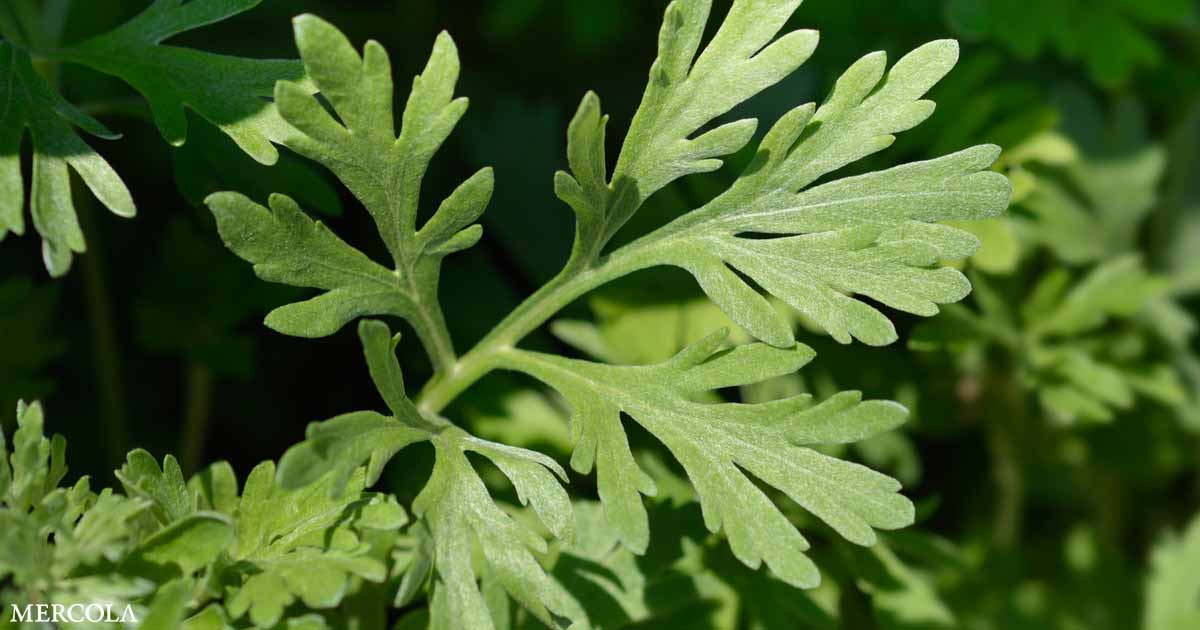 Several traditional antimalarial remedies have been shown to effectively tackle COVID-19. In addition to the hydroxychloroquine and ivermectin drugs, there is also sweet wormwood (Artemisia annua, not to be confused with Artemisia vulgaris, a related but moderately poisonous plant).

Sweet wormwood is a traditional plant-based medicine with antiparasitic, antiviral and anticancer properties. In April 2020, China added three Traditional Chinese Medicine (TCM) formulas to its standard of care for COVID-19, including one containing sweet wormwood, called Jinhua Qinggan. All three formulas had previously been used against seasonal influenza, SARS, and pandemic swine flu (H1N1) influenza in 2009. As reported by NutraIngredients-Asia, April 24, 2020:1

The Chinese government has officially recognized three TCM formulas as part of its standard therapy for COVID-19. The three formulas – Lianhua Qingwen Capsule, Jinhua Qinggan Granule, and Xuebijing Injection – are patented products that are already commercially available and have been tested on COVID-19 patients in clinical settings. “

In May 2020, C&EN reported that researchers in a number of different countries were looking into wormwood as a potential COVID treatment,4 and in 2021, researchers from the Southwest College of Naturopathic Medicine in Tempe, Arizona, identified Artemisia annua as one of the best herbal medicine’s against COVID, out of the 30 tested, based on its ability to inhibit replication of SARS-CoV-2 virus.5

Some of this global research into sweet wormwood came to fruition earlier this year. January 17, 2022, Reuters reported a Pakistani trial of Jinhua Qinggan granules had been completed, with successful results:6

“Pakistani health authorities on Monday announced the completion of a successful clinical trial of Chinese traditional herbal medicine for treating COVID-19, as the South Asian nation enters a fifth wave of pandemic driven by the Omicron variant.

The Chinese medicine, Jinhua Qinggan Granules (JHQG) manufactured by Juxiechang (Beijing) pharmaceutical Co. Ltd., is already being used in the treatment of COVID-19 patients in China.

‘Since it has been tried on patients with different variants of COVID-19, we expect it to be effective on Omicron as on other variants,’ Professor Iqbal Chaudhry, director of the International Center for Chemical and Biological Science (ICCBS) where trials were conducted , told reporters. “

The Pakistani trial included 300 COVID-positive patients who were treated at home for mild to moderate infection. The efficacy of TCM medicine was 82.6%.

In February 2022, Saudi Arabian researchers also published a paper detailing how one of its main components, artemisinin, and its derivatives inhibit SARS-CoV-2 infection. As explained by the authors:7

“SARS-CoV-2 … relies on the non-structural protein Nsp1 for multiplication within the host cells and disarms the host immune defenses by various mechanisms … The SARS-CoV-2 genome codes for two large overlapping open reading frames (ORF1a and ORF1b) in gene 1 as well as several structural and nonstructural accessory proteins.

SARS-CoV-2 hijacks the translation machinery of the infected cell to produce ORF1a and ORF1b polyproteins, which is then proteolytically cleaved into sixteen mature non-structural proteins, namely Nsp1 through Nsp16. The N-terminal nonstructural protein 1 (Nsp1) is one of these proteins …

Nsp1 suppresses all cellular antiviral defense mechanisms that rely on host factor expression, including the interferon response. This suppression of critical components of the innate immune system may aid virus multiplication and immune evasion. SARS-CoV Nsp1 is a promising therapeutic target because of its important function in suppressing the antiviral immune response …

While studies have shown the significance of Nsp1 as a key virulence factor in the pathogenesis of SARS-CoV-2 infection and as a therapeutic drug target, no specific inhibitors of this enzyme have been reported to date.

Thus, using a molecular docking and molecular dynamics method, the current study investigates the potential of artemisinin and its derivatives to inhibit the activity of SARS-CoV-2 Nsp1. “

In all, artemisinin and nine artemisinin derivatives were evaluated. Remdesivir was used as a reference drug, as it too binds to Nsp1. Several of the sweet wormwood compounds were found to perform well. As reported in this study:8

“SARS-CoV-2 combats the host immune defense mechanisms by synthesizing Nsp1 protein, a major virulence factor. The SARS-CoV-2 Nsp1, commonly known as the host shutdown factor, inhibits the host’s gene expression and innate immune responses. It is a promising therapeutic drug target since it suppresses the antiviral immune responses of the host …

Artemisinin and its derivatives have been recently explored for their capacity to fight SARS-CoV-2 infection due to their anti-inflammatory, immunoregulatory, and broad-spectrum antiviral characteristics …

Artemisinin and its derivatives bind to the target enzyme with favorable binding energies and the interactions are mediated through hydrogen bonds and hydrophobic interactions. The three top-ranked leads identified in the studies were Artesunate, Artemiside and Artemisone which demonstrated higher binding affinities to Nsp1 than the reference drug.

The compounds show favorable drug-like properties. The molecular dynamics simulations … reveal that Artesunate significantly caused conformational changes in the target protein and stably bonded to it via hydrogen bond interactions. “

In late 2020, a collaborative effort between researchers at Columbia University, University of Washington and Worcester Polytechnic Institute demonstrated that a hot water extract of Artemisia annua had antiviral activity against SARS-CoV-2.9,10 The extracts were tested on the virus propagated in human cells.

The researchers used extracts sourced from four different continents, all of which demonstrated antiviral activity against SARS-CoV-2, including two of the then-newer variants. Although it did not appear to block viral entry into the cell, the extract did reduce the inflammatory response and inhibited infection “by targeting a post-entry step.”

The researchers hypothesized that the active component in the extract may actually be something other than artemisinin, or that it acts synergistically with some other component to block post-entry infection.

Interestingly, the data revealed that the concentrations could vary by nearly 100-fold and still be effective. In an interview with Spectrum News 1, one of the researchers noted that11 “this looks like it could be a therapy [against COVID] and very easy to implement globally … “

Other studies suggest artemisinin can help in the treatment of COVID by inhibiting the activity of certain enzymes, stimulating your adaptive immunity, downregulating proinflammatory cytokines,12 reducing the inflammatory response and blunting fibrosis.13

Artemisia annua is also bioactive against other viruses, including cytomegalovirus, hepatitis B and C, and members of the herpes family, including herpes virus type 1 and Epstein-Barr.14

The fact that there are easily-obtainable over-the-counter remedies against COVID-19 is good news. None will do you any good, however, unless you have them when you need them. Remember, you want to begin aggressive treatment immediately at the first sign of symptoms. Don’t wait.

Considering how contagious the Omicron variant is, chances are you’re going to get it, so buy what you’ll need now, so you have it on hand if / when symptoms arise. And, remember, this applies to those who have gotten the jab as well, since you’re just as likely to get infected – and perhaps even more so.

While it’s possible you might have the common cold or a regular flu, it’s hard to tell these infections apart, so your best bet is to assume it’s COVID and treat accordingly.

Herbal remedies like sweet wormwood can be a worthwhile addition to your medicine cabinet, but I would not recommend relying on it as a sole remedy. At this point, we have several early treatment protocols with demonstrated effectiveness, so I would strongly advise you to follow one of those (see below), and use any herbal formulas as an adjunct.

Based on my review of these protocols, I’ve developed the following summary of the treatment specifics I believe are the easiest and most effective.