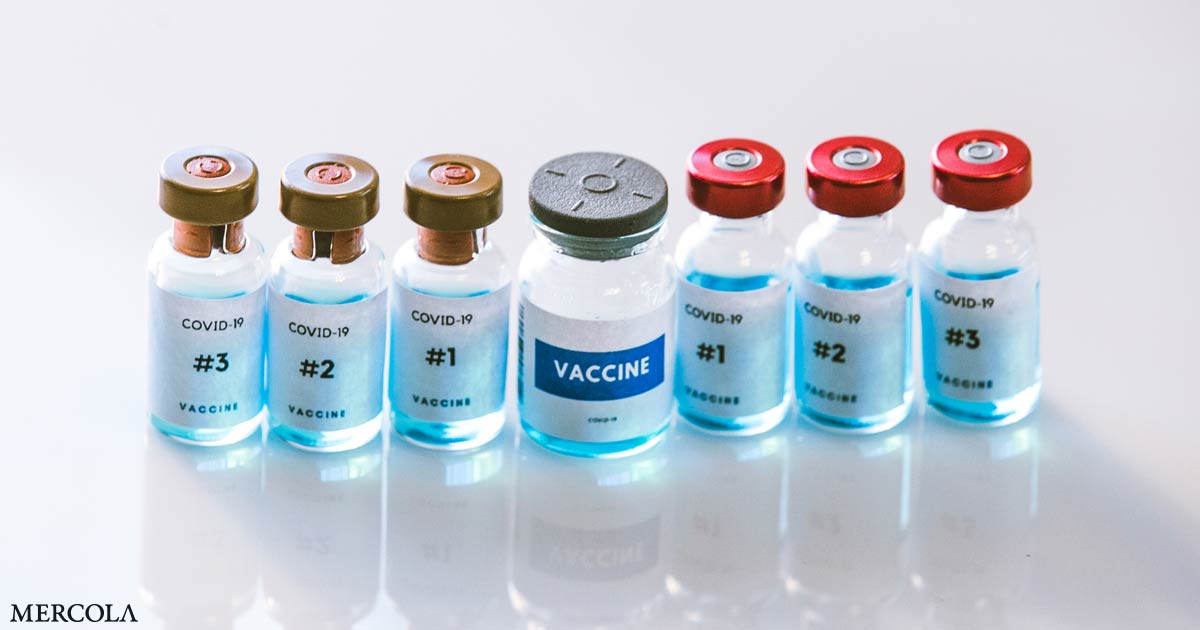 The video above features Dr. Peter McCullough, a cardiologist, internist and epidemiologist, and editor of two peer-review journals, who has been on the media and medical frontlines fighting for early COVID treatment. McCullough has also been outspoken about the potential dangers of the COVID shots, and the lack of necessity for them. Curiously, agencies that are currently calling the shots do not have the authority to dictate how medicine is practiced.

Ditto for the U.S. Centers for Disease Control and Prevention, which is an epidemiologic analysis organization. It is the job of practicing doctors to identify appropriate and effective treatment protocols, which is precisely what McCullough has been doing since the start of this pandemic.

In August 2020, McCullough’s landmark paper “Pathophysiological Basis and Rationale for Early Outpatient Treatment of SARS-CoV-2 Infection” was published online in the American Journal of Medicine.1

COVID Shots Are Dangerous and Ineffective

He points out the safety signal is very clear, with 19,249 deaths having been reported to the U.S. Vaccine Adverse Events Reporting System as of November 19, 2021.3

The signal is also consistent both internally and externally. A number of side effects are reported in high numbers, and very close to the time of injection, that validate the suspicion that the shots are at fault. The U.S. data are also consistent with data from other countries, such as the Yellow Card system in the U.K.

Despite that, not a single safety review has been conducted to weed out risk factors and the like. “We’re almost a year into the program and there’s been no attempt at risk mitigation,” McCullough says. At the same time, there have been gross attempts to coerce Americans into taking the shots — everything from free beer or a free lap dance, to million-dollar lotteries and paid scholarships to state universities.

Such enticements are an undeniable violation of research ethics that strictly forbid any and all kinds of coercion of human subjects. As suspected and predicted, no sooner had bribery stopped working than government officials started talking about vaccine mandates.

President Biden infamously stated that his patience with “vaccine hesitancy” was “wearing thin.” The insinuation was that if people didn’t get the shot, they’d face serious repercussions, and we’re now seeing those repercussions play out day by day, as people are being fired and kicked out of school for refusing the jab.

Meanwhile, they haven’t even determined which vaccine is the most effective, which is remarkable. If government really wanted to end the pandemic with a vaccine, wouldn’t they determine which shot works the best and promote the use of that? But no, they tell us any shot will do.

“The fact that there’s no safety report, they’re not telling you if you’re taking the best vaccine, the fact that it’s kind of in a distorted way linked to your ability to work and go to school, that we’re violating the Nuremberg Code, violating the declaration of Helsinki — it’s just not adding up. It’s not looking good for those who are promoting the vaccine,” McCullough says.

Add to all that the now-clear finding that the shots offer only limited protection for a very short time — six months at best. According to McCullough, there are more than 20 studies showing efficacy drops to nothing at the six-month mark. They’ve also had very limited effectiveness against the Delta variant, which has been the predominant strain for several months.

Why Booster Treadmill Is Such a Health Hazard

I’ve often stated that, in all likelihood, your risk of side effects will rise with each additional shot. McCullough cites research showing your body will produce the toxic SARS-CoV-2 spike protein for 15 months.

If your body is still producing the spike protein — which is what’s causing the blood clots and cardiovascular damage — and you take an additional shot every six months, there will come a time when your body simply cannot withstand the damage being caused by all the spike protein being produced.

Also consider this: While you only get at most six months’ worth of protection from any given shot, each injection will cause damage for 15 months. If we continue with boosters, eventually, it’s going to be impossible to ever clear out the spike protein.

It causes blood clots, myocarditis and pericarditis, strokes, heart attacks and neurological damage, just to name a few. As noted by McCullough, the spike protein of this virus was genetically engineered to be more dangerous to humans than any previous coronavirus, and that is what the COVID shots are programming your cells to produce. “They’re just grossly unsafe for human use,” McCullough says.

Myocarditis Will Likely Be Widespread

He goes on to discuss research from 2017,4 which showed myocarditis in children and youth occurs at a rate of four cases per million per year. Assuming there are 60 million American children, the background rate for myocarditis would be 240 cases a year. How many cases of myocarditis have been reported to VAERS following COVID injection so far? 14,428 as of November 19, 2021.5

“Doctors have never seen so many cases of myocarditis,” McCullough says, citing research showing that among children between the ages of 12 and 17, 87% are hospitalized after receiving the shot. “That’s how dangerous it is,” he says. “It is frequent, and it is severe.”

Yet the FDA claims myocarditis after the COVID shot is “rare and mild.” We’re now also getting reports of fatal cases of myocarditis in adults in their 30s and 40s. “Myocarditis right now looks like an unqualified disaster,” McCullough says, both for younger people and adults.

Sadly, children also reap no benefit from the shots, so it’s all risk and no benefit for them. McCullough points out there has been no recorded school outbreaks and no child-to-teacher transmission. He estimates 80% of school aged children are already immune, which would explain this.

As noted by McCullough, rates of COVID are higher now in the highest vaccinated areas than they were before the vaccine rollout. That too tells us they aren’t working and not worth the risk.

He cites research6 published September 30, 2021, in the European Journal of Epidemiology, which found no relationship between COVID-19 cases and levels of vaccination in 68 countries worldwide and 2,947 counties in the U.S. If anything, areas with high vaccination rates had slightly higher incidences of COVID-19. According to the authors:7

“There … appears to be no significant signaling of COVID-19 cases decreasing with higher percentages of population fully vaccinated,” the authors wrote.9 Notably, out of the five U.S. counties with the highest vaccination rates — ranging from 84.3% to 99.9% fully vaccinated — four of them were on the U.S. Centers for Disease Control and Prevention’s “high transmission” list. Meanwhile, 26.3% of the 57 counties with “low transmission” have vaccination rates below 20%.

The study even accounted for a one-month lag time that could occur among the fully vaccinated, since it’s said that it takes two weeks after the final dose for “full immunity” to occur. Still, “no discernable association between COVID-19 cases and levels of fully vaccinated” was observed.10

Hospitalization rates for severe COVID infection have also risen, from 0.01% in January 2021 to 9% in May 2021, and the COVID death rate rose from zero percent to 15.1% in that same timeframe.11 In short, everything is getting worse, not better, the more people get these shots.

Allowing natural immunity to build is really the only rational way forward. But then again, the COVID jabs aren’t about protecting public health. They’re about ushering in a socio-economic control system via vaccine passports, which is something McCullough doesn’t discuss in this interview. Nothing makes sense if you look at it from a medical standpoint. It only makes sense if you see it for what it is, which is a control system.

The COVID shot induces antibodies against just one of those proteins, the spike protein, and no T cell immunity. When you’re infected with the whole virus, you develop antibodies against all parts of the virus, plus memory T cells.

This also means natural immunity offers better protection against variants, as it recognizes several parts of the virus. If there are significant alternations to the spike protein, as with the Delta variant, vaccine-induced immunity can be evaded. Not so with natural immunity, as the other proteins are still recognized and attacked.

Here’s a sampling of scholarly publications that have investigated natural immunity as it pertains to SARS-CoV-2 infection. There are several more in addition to these:12

McCullough stresses there is also no need to worry about reinfection if you’ve already had COVID once. The fact is, while breakthrough cases continue among those who have gotten one or more COVID-19 injections, it’s extremely rare to get COVID-19 after you’ve recovered from the infection.

How rare? Researchers from Ireland conducted a systematic review including 615,777 people who had recovered from COVID-19, with a maximum duration of follow-up of more than 10 months.24

Another study revealed similarly reassuring results. It followed 43,044 SARS-CoV-2 antibody-positive people for up to 35 weeks, and only 0.7% were reinfected. When genome sequencing was applied to estimate population-level risk of reinfection, the risk was estimated at 0.1%.28

There was no indication of waning immunity over seven months of follow-up, unlike with the COVID-19 injection, which led the researchers to conclude that “Reinfection is rare. Natural infection appears to elicit strong protection against reinfection with an efficacy >90% for at least seven months.”29

“It’s a one-and-done,” McCullough says. If you’ve had it once, you won’t get it again. He also advises against using PCR testing after you’ve had confirmed COVID-19 once, as any subsequent positive tests are just going to be false positives.

• Oral-nasal decontamination — The virus, especially the Delta variant, replicates rapidly in the nasal cavity and mouth for three to five days before spreading to the rest of the body, so you want to strike where it’s most likely to be found right from the start.

Research30 has demonstrated that irrigating your nasal passages with 2.5 milliliters of 10% povidone-iodine (an antimicrobial) and standard saline, twice a day, is an effective remedy.

Another option that was slightly less effective was using a mixture of saline with half a teaspoon of sodium bicarbonate (an alkalizer). You can also gargle with these to kill viruses in your mouth and throat. When done routinely, it can be a very effective preventive strategy. You can find printable treatment guides on TruthForHealth.org.

In a May 10, 2021, Orthomolecular Medicine press release,33 Dr. Thomas E. Levy — board-certified in internal medicine and cardiology — discussed the use of this treatment for COVID-19 specifically. Levy has in fact written an entire book on peroxide nebulization called “Rapid Virus Recovery,” which you can download for free from MedFox Publishing.

• Vitamin D optimization — Research has shown having a vitamin D level above 50 ng/mL brings the risk of COVID mortality down to near-zero.34

• Other key nutraceuticals — Vitamin C, zinc, quercetin and NAC all have scientific backing.

Doxycycline or azithromycin are typically added as well, to address any secondary bacterial infection, as well as inhaled budesonide (a steroid). Oral steroids are used on and after the fifth day for pulmonary weakness and aspirin or NAC can be added to reduce the risk of clotting. In the interview, McCullough discusses the use of each of these, and other, drugs.

One drug I disagree with is full-strength aspirin. I believe a potentially better, at least safer, alternative would be to use the enzymes lumbrokinase and serrapeptase, as they help break down and prevent blood clots naturally.