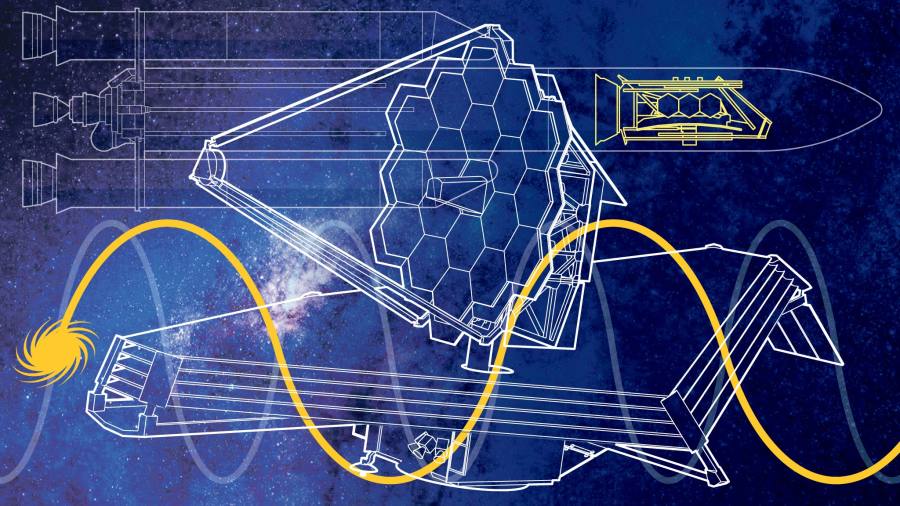 The most ambitious and expensive telescope ever made was launched into space on Christmas, with the aim of seeing deeper into space – and thus further into the past – than ever before.

After three decades of planning and construction burdened with numerous delays and rising costs, the $ 10 billion James Webb Space Telescope is finally on its way into special orbit, four times farther from Earth than the Moon.

At the European Space Agency’s control center in Kourou, French Guiana, scientists and engineers cheered and applauded at a critical moment marking a successful launch, when the telescope detached from the upper stage of the Ariane 5 rocket after 27 minutes and began its own journey to its vantage point. 1.5 m km.

“This is a great day not only for America and our European and Canadian partners, but it is also a great day for planet Earth,” said Bill Nelson, head of the US space agency NASA, which led the international project.

Webb’s primary goal is to capture the first stars and galaxies that formed from the original gas in the “cosmic dawn” about 200 million years after the Big Bang.

But astronomers also expect the Webb telescope to provide a treasure trove of objects closer to home, especially planets – both in our solar system and those orbiting stars elsewhere in the galaxy. His instruments will measure the chemical composition of these planetary atmospheres, looking for molecular building blocks of life.

Richard Ellis, a professor of astrophysics at University College London, has been involved in the project since the early 1990s, when the U.S. space agency Nasa assembled a scientific team to plan the successors to the recently launched Hubble Observatory. Named James Webb after the director of NASA who led the Apollo program during the 1960s.

“It became very expensive, there were a lot of delays and Webb was threatened with cancellation several times,” Ellis said. “But now, finally, we have a telescope that astronomers are very excited about and proud of.”

Webb’s 6.5-foot primary mirror makes it 100 times more powerful than Hubble. But the main difference between the two large telescopes is that Hubble observes visible light, while Webb operates in the infrared. The latter is far better for detecting extremely distant objects because their light moves to greater wavelengths as space expands.

While Hubble is in low orbit just 550 km above the Earth, Webb will be 1.5 m km at the “second Lagrange point”, or L2. Here gravity from the Sun and Earth accurately balances the orbital motion of the satellite, so it seems to hover in the same place in space.

The advantage of L2 over low Earth orbit is that its great distance from the planet makes it much easier to keep the Web cool and avoids interference from Earth’s infrared radiation. One drawback is that it is too far away to be reached by a maintenance and repair mission if something goes wrong. Hubble was famously saved from embarrassment in 1993, when Shuttle astronauts installed corrective optics on his faulty mirror.

It will take Webbu about a month to reach L2. Along the way, it will open its primary mirror, which is made of 18 hexagonal plates of gold-plated beryllium metal, and a giant sun shield, the size of a tennis court, which will keep the telescope in eternal shadow at an expected temperature of -233C.

But even that isn’t cold enough for one of Webb’s four instruments, the mid-infrared instrument, or MIRI. It will drop to -266C, just seven degrees above absolute zero, with the help of a cryocooler. “It works on the same principle as your home refrigerator, except that the coolant is helium, which is liquid at extremely low temperatures,” said Gillian Wright, director of the UK Astronomy Technology Center in Edinburgh and co-leader of the MIRI team.

MIRI will play a key role both in detecting the star’s first twinkles through dense clouds of primordial gas during cosmic dawn and in analyzing the atmospheres of distant planets. But when asked which observations she was most looking forward to, Wright replied: “I am most excited to have found something that is a complete surprise. We’ve never had a mid-infrared instrument like MIRI in space before, and it will find things we just don’t know about now. ”

Wright added that Webb and his instruments will begin work with a series of commissioning observations during April and May to check that everything is working well. Astronomical research will then begin around July.

The Baltimore Space Telescope Science Institute has been allocating observation time to astronomers at Hubble for 30 years, and will do the same for Webb. The number of sites is heavily subscribed, so a review system is used to decide who should procure them, and some are reserved for scientists involved in building telescope instruments.

Wright said her team will intensively examine a small piece of the sky that Hubble has already studied, called Hubble Deep Field, to look for ultra-weaker and extremely early galaxies. “We also have a big program that deals with the atmosphere of the planet,” she said. Another question scientists want to answer is how exoplanets – around stars orbiting elsewhere in our galaxy – are formed from cosmic dust.

Although the launch on Christmas went perfectly, astronomers now have to endure what Ellis called “several torturous months,” waiting for the Web to complete its complex series of unfolding and putting instruments into operation.

If the telescope is in good condition, it promises huge scientific dividends – an astronomical Christmas present that should last a decade.

“I’ve been working on the early evolution of galaxies for years,” Ellis said. “Watching ‘Cosmic Dawn’ with Webb will be the culmination of my career.”