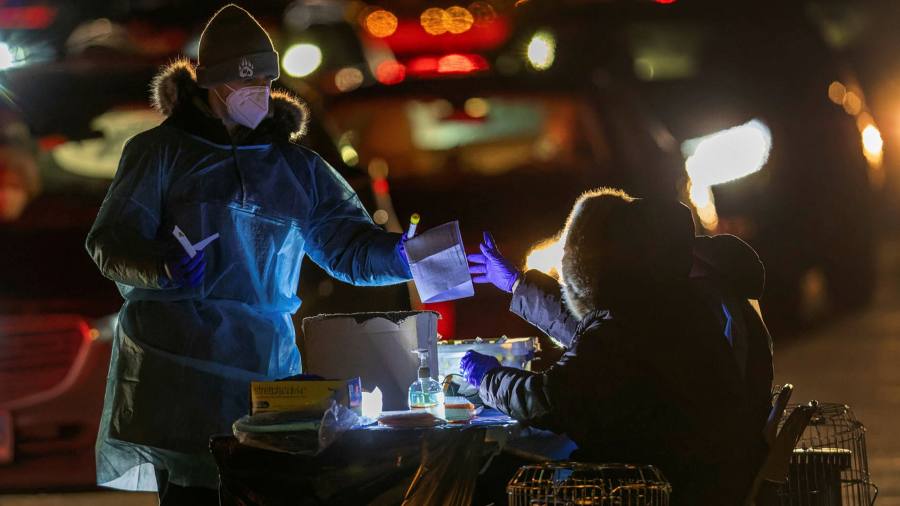 U.S. health officials have sharply lowered their estimates of how much of the country’s Covid-19 wave is caused by a variant of the Omicron coronavirus, highlighting uncertainties surrounding the country’s response to the pandemic.

The U.S. Centers for Disease Control and Prevention said Tuesday it now believes the highly transmissible strain is responsible for just over half of the country’s Covid infections, not three-quarters, as estimated a week ago.

The change in CDC estimates came after the agency received more information on a sample from previous weeks, officials said. But they also stand out difficulties federal health officials have faced trying to gain an accurate picture of the U.S. pandemic, given that so much health data is stored locally and state-wise.

A spokesman said: “There was a wide range of predictions posted on last week’s chart, in part because of the speed at which Omicron was increasing. More data from that time frame was received and the share of Omicron was reduced.

“It is important to note that we are still seeing a steady increase in Omicron’s share.”

The CDC shocked many in the U.S. health community last week when it said Omicron now accounts for 73 percent of cases, up from 13 percent the previous week. However, new figures show a more gradual increase in the last three weeks, from 7 percent to 23 percent and now 59 percent.

The total number of cases in the U.S. continues to rise, and some parts of the country now have record numbers of those infected. Hospitalizations and deaths have grown much more slowly, however, reflecting the experiences of places such as South Africa and the UK.

The latest wave of cases has caused widespread disorders, with many people having to isolate themselves for long periods of time despite mild or no symptoms. Nearly 1,000 U.S. flights were canceled Tuesday morning, according to flyaware.com, adding to the thousands that were canceled over the Christmas weekend.

The CDC tried to rectify this on Monday, cutting the recommended quarantine period for infected persons is 10 days to five, until symptoms resolve or subside.

But the move drew criticism from some public health scientists on whose support the Biden administration could rely heavily.

Eric Topol, director of the Scripps Research Translational Institute in California, said: “It seems pretty chaotic. Yesterday you have a post about guidelines for isolation without data, without evidence, anything. And this is from an administration that says it wants to stick to science.

“Then today we have drastic changes in their genomic estimates. The last 24 hours have shown that the agency’s credibility is less than it has been at any time during this administration. “

The Biden administration has also faced criticism in recent weeks for its lack of capacity to test for Covid in the U.S., with long queues building on landfills as Omicron has grown.

Last week, the U.S. president announced that the federal government would respond by distributing 500 million tests at home. Speaking to reporters on Wednesday, Biden said his administration had “made little progress” in distributing test kits.

He added that the decision on whether to order vaccines for all passengers on domestic flights in the United States will be made “when I receive a recommendation from the medical team”.