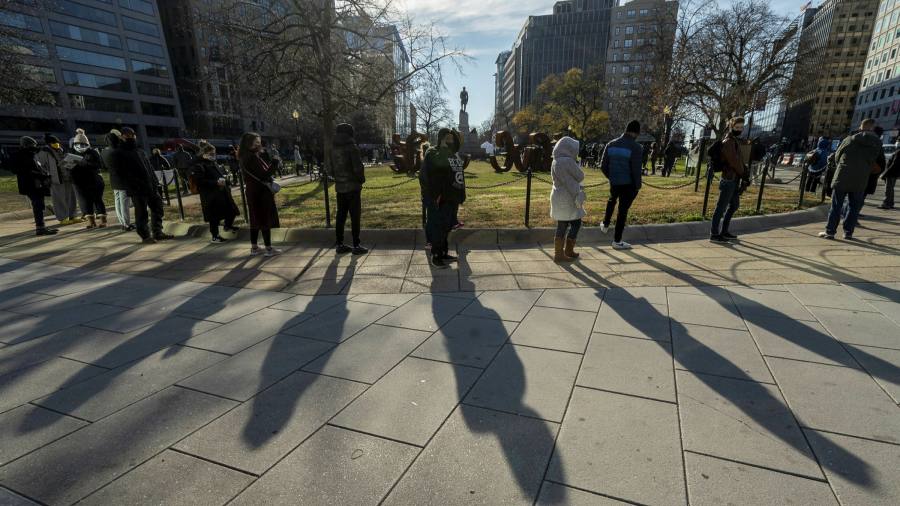 President Joe Biden’s chief medical adviser warned on Sunday that the number of Americans infected with Covid-19 is likely to be “much higher” before it calms down in the new year.

Anthony Fauci told ABC News on Sunday that “a large number of cases. . . it is likely to go much further ”given the“ extraordinarily contagious ”nature Omicron is a variant of the coronavirus.

The latest figures from the Centers for Disease Control and Prevention suggest that about three-quarters of new Covid cases in the U.S. are related to the new variant.

“Obviously we need to be better,” Fauci said. “I think things will get a lot better as we get into January, but that doesn’t help us today or tomorrow.”

The U.S. has recorded nearly 3.9 million new cases of Covid in the last 28 days, according to the latest data collected Johns Hopkins University, with a sharp rise in the past week. Many local authorities do not report coronavirus cases and weekend hospitalization rates, but cities including New York and Washington DC have reported some of the sharpest increases in Covid cases during the holiday season.

The explosion of cases in the US reflects trends recorded in the UK, Europe and other parts of the world. China reported the highest case rate since January over the weekend, while France and Italy set records for the number of new cases in a single day.

The aggressive rise in Covid cases in the U.S. comes amid a lack of PCR and rapid tests at home leading to long queues in many U.S. cities and raising concerns that Americans are unknowingly spreading the virus during the Christmas holidays.

“People should be tested before they get together, especially with high-risk people. . . we have a lot of vaccines, it’s not a problem, but unfortunately we don’t have enough tests, ”said Ashish Jha, dean of the Brown University School of Public Health. Fox News Sunday. “This is really something we’ve been supposed to be on top of for months and I’m disappointed we’re right here as a state.”

Biden admitted the wrong step in a television interview last week, saying the White House should have earlier launched a free distribution of rapid Covid tests across the country. Just four days before Christmas, the president announced that the federal government would buy 500 million tests at home and send them by mail – a move that many public health officials said was too late.

U.S. public health officials say they are encouraged by data from South Africa and the United Kingdom suggesting that the Omicron variant is less severe than previous coronavirus incarnations. But they continue to warn of the risks posed by unvaccinated Americans, who are more likely to be hospitalized or die from Covid than those vaccinated.

According to the latest data collected by Our World in Data, just over 60 percent of people in the U.S. are “fully vaccinated” with two stings, while roughly one in five received a third supplemental vaccine.

Fauci said the White House was “particularly concerned” about the tens of millions of Americans who were eligible for vaccination but did not receive stab wounds.

“While we are pleased with the evidence from several countries that there appears to be a lower degree of seriousness, we must be careful not to feel complacent about it,” Fauci said. “It could still lead to a lot of hospitalizations in the United States.”

The New York State Department of Health has issued a warning on Christmas Eve due to the “growing trend of pediatric hospitalizations associated with Covid-19,” especially in New York City. Health officials there have warned that the number of children in hospital with the virus quadrupled between December 5th and 19th. Children under the age of five in the U.S. are not currently eligible for vaccination.

Many U.S. cities have imposed vaccines that limit the ability of unvaccinated Americans to enjoy restaurants, concerts, and other public spaces. The U.S. Supreme Court will consider next month whether the Biden administration’s plans for a vaccine mandate at the national level for private-sector employers with more than 100 workers are constitutional.

American airlines have canceled hundreds of flights in recent days, and carriers blame the lack of staff after a critical mass of employees tested positive for Covid during one of the busiest travel periods of the year.

In France, 105,000 new infections were recorded on Christmas, the highest level since the beginning of the pandemic. Experts estimate that the Omicron variant now represents the majority of infections in Paris.

The government of President Emmanuel Macron will hold an emergency meeting on Monday to discuss whether tougher measures are needed to slow the spread, such as curfew or postponing the start of schooling after the holidays. But so far, the government has advocated faster introduction of reinforcement doses rather than imposing broad restrictions on companies that would harm the economic recovery.

Much will depend on whether French hospitals can handle more admissions during and after the Christmas period. His hospitals were under pressure from staff shortages and absenteeism even before the full impact of the Omicron variant was felt. The death toll reached 1,031 last week – a level not seen since last April – bringing the total death toll to more than 122,500.