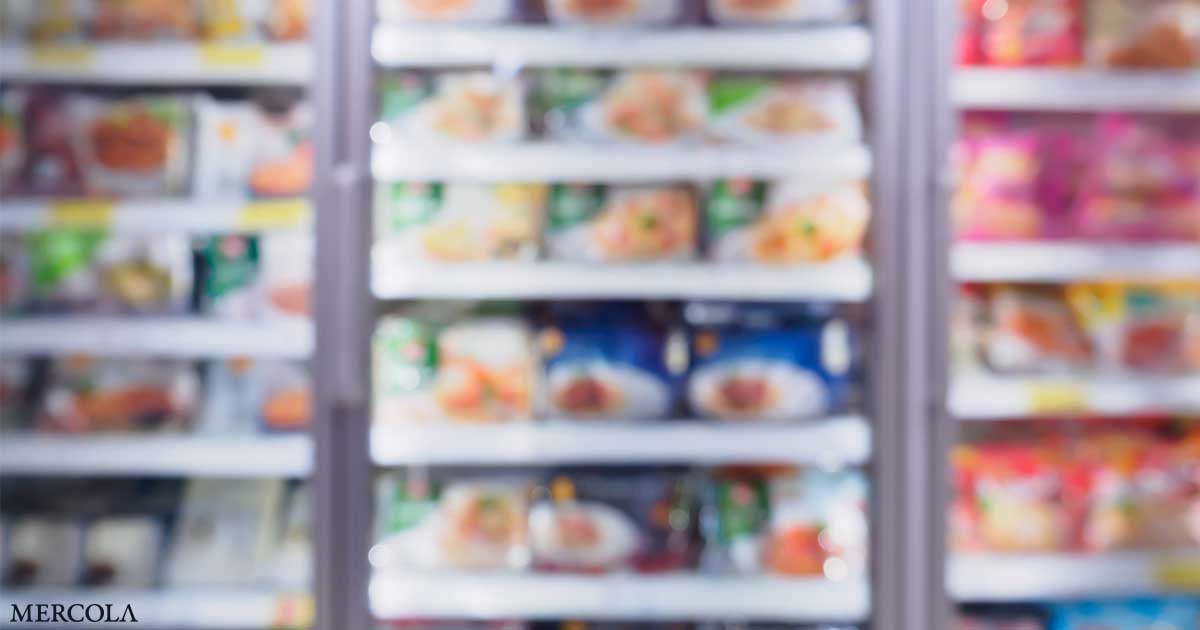 This article was previously published April 29, 2020, and has been updated with new information.

As the world deals with the scope of the COVID-19 pandemic, scientific articles have zeroed in on who is most vulnerable to the virus. It appears those who are elderly, overweight and suffer from an underlying health condition like diabetes or high blood pressure are most at risk. But the consumption of ultraprocessed food is increasingly seen as a risk factor for contracting COVID-19, too.

Ultraprocessed foods increase the risk of conditions like obesity, cancer, Type 2 diabetes, cardiovascular disease and gallstones, which make you more vulnerable to illnesses like COVID-19. In fact, eating over four servings of ultraprocessed foods daily increased the risk of premature death by 62% in a 2019 study.1

When it comes to fighting off COVID-19, ultraprocessed foods pose another health danger: They compromise the gut microbiome, which has a crucial role in your body’s immune response to infection and in maintaining overall health. Even before the virus that causes COVID-19 surfaced, ultraprocessed foods were a bad idea but during the current pandemic they are especially dangerous.

What are ultraprocessed foods, sometimes referred to as UPFs? According to the NOVA Food Classification system, designed by the Center for Epidemiological Studies in Health and Nutrition, they are:2

“[I]ndustrial formulations made entirely or mostly from substances extracted from foods (oils, fats, sugar, starch, and proteins), derived from food constituents (hydrogenated fats and modified starch), or synthesized in laboratories from food substrates or other organic sources (flavor enhancers, colors, and several food additives used to make the product hyper-palatable).

Manufacturing techniques include extrusion, moulding, and preprocessing by means of frying. Beverages may be ultra-processed.”

Ultraprocessed foods, aggressively marketed by giant food producers for their profitable potential, constitute around 25% to 60% of daily energy intake in many countries, according to Science Daily. They include:3

While it is tempting to dismiss the dangers of UPFs by saying that all foods, to some extent, are “processed,” food writer Bee Wilson says that is not the case:4

“UPFs are different. They are processed in ways that go far beyond cooking or fermentation, and they may also come plastered with health claims. Bettina Elias Siegel the author of Kid Food: The Challenge of Feeding Children in a Highly Processed World … ‘there’s a huge difference between a cooked carrot and a bag of industrially produced, carrot-flavoured veggie puffs’ …”

You can’t help but wonder if that is why Harvard Medical School/Partners in Health, a recipient of Coca-Cola funding, writes this about obesity:7

“Obesity results from energy imbalance: too many calories in, too few calories burned. A number of factors influence how many calories (or how much ‘energy’) people burn each day, among them, age, body size, and genes. But the most variable factor — and the most easily modified — is the amount of activity people get each day.”

Obesity is increasingly linked to serious cases of COVID-19 that require hospitalization, even among young people, according to The New York Times.8 The reasons are not entirely clear, but abdominal obesity can cause compression of the lungs and diaphragm, which impairs breathing ability.

Other factors that could explain the link between obesity and serious cases of COVID-19 could include pre-existing respiratory conditions, a greater amount of circulating, pro-inflammatory cytokines and low-grade inflammation, which are all correlated with obesity. Almost 80 million Americans — 42 percent of the population — are obese.9

A report released by the Intensive Care National Audit and Research Centre on 196 patients critically ill with COVID-19 found 56 patients had a body mass index (BMI) of 25 to 30, which is classified as overweight.10 Fifty-eight had a BMI of 30 to 40, which indicates obesity, and 13 had a BMI of 40 or higher, which is severely obese. In the study, 71.7% of the critical patients were overweight, obese or severely obese.11

Two studies published by The BMJ in 2019 cast ultraprocessed food as a threat to global public health. In a linked editorial, Australian researchers add that the negative effects of UPFs on the gut microbiome must be explored.12

Science has increasingly revealed the huge effect of diet on the human microbiome and its ability to ward off disease. The more diverse with healthy microorganisms a microbiome is, the better it supports the immune system, according to Tim Spector, professor of genetic epidemiology at King’s College in London — especially as COVID-19 has spread all over the world. Writing in The Conversation, Spector says:13

“As well as mounting a response to infectious pathogens like coronavirus, a healthy gut microbiome also helps to prevent potentially dangerous immune over-reactions that damage the lungs and other vital organs. These excessive immune responses can cause respiratory failure and death …

Fermented foods and probiotics are the best route to optimal microbiome health, if they are traditionally made and unpasteurized. Healthy fermented choices include lassi (an Indian yogurt drink), fermented, grass fed organic milk (kefir), fermented soy or natto and different types of pickled fermentations of cabbage, turnips, eggplant, cucumbers, onions, squash and carrots.

Unless antibiotics are absolutely necessary, they should be avoided and, if avoidance is not possible, counteracted with fermented food and probiotics. Be aware that conventionally-raised meats are also a source of antibiotics because animals are routinely fed the medications. Genetically engineered grains and chlorinated and/or fluoridated water can also destroy gut flora.

UPFs Have Put Millions at Risk for COVID-19

Ultraprocessed food is designed to be sensually appealing, hyperpalatable and habit-forming, thanks to additives, crafty packaging and marketing and “convenience.” Yet UPFs fill you up without the vitamins, minerals, live enzymes, micronutrients, healthy fats and high-quality protein your body needs. UPFs increase how fast people eat and delay how “full” they feel, causing obesity and metabolic dysfunction.

Dr. Aseem Malhotra is an honorary consultant cardiologist at Lister Hospital in Stevenage, England.14 According to an article he wrote in European Scientist, UPFs cause:15

“… chronic metabolic disease which can affect many of ‘normal’ weight. Furthermore, sarcopenic obesity may misclassify many elderly patients to having a normal BMI on hospital admission with COVID-19 … There’s no such thing as a healthy weight, only a healthy person.

Kristin Lawless, author of the book, “Formerly Known As Food: How the Industrial Food System Is Changing Our Minds, Bodies, and Culture,” also sees correlations between metabolic dysfunction and succumbing to COVID-19:16

“These underlying conditions correlate with increased morbidity and mortality for those who contract the virus. Preliminary findings show that metabolic dysfunction is causing devastating complications from COVID-19 and, shockingly, only 12 percent of the entire U.S. adult population is considered metabolically healthy.

While the millions who suffer from metabolic syndrome from UPFs are not seen as urgent like COVID-19 is, the problems are one and the same, according to Malhotra. Governments, in addition to telling people to stay home to save lives during the COVID-19 pandemic, should address diet, he asserts. He writes:17

“[A]n equally strong if not more significant population health message should now be to ‘eat real food, protect the NHS and save lives.’

Such implementation backed by policy changes may not just save hundreds and potentially thousands of lives around the world in the coming months but given the high likelihood of another international viral pandemic in the next decade a healthier population … will be much better equipped to handle what would then be a smaller mortality peak on the next occasion.”

People living in poverty, whether in developing or advanced countries, are especially vulnerable to health problems from ultraprocessed foods and COVID-19. According to Malhotra:18

“[T]he disproportionate numbers of those from black and ethnic minority backgrounds succumbing to the virus may in part be explained by a significantly increased risk of chronic metabolic disease in these groups.”

Even before the COVID-19 pandemic, food giants have targeted those with low incomes with aggressive marketing of UPFs. Following initiatives by Brazil to fight the trend, Ecuador, Uruguay and Peru have urged citizens to avoid UPFs in favor of natural foods.19 Food deserts further the dietary exploitation of the poor, according to Lawless:20

“New data show that Black people are dying at higher rates from COVID-19 than other groups. Certainly lack of health care and poor quality of care shape outcomes, and it is well documented that poverty rates among people of color are significantly higher than in white populations.

Perhaps less obvious is the influence of Big Food’s targeted advertising to people of color in neighborhoods with little access to fresh, whole foods. This means many people of color often rely on fast-food and cheap packaged foods for meals that provide more caloric bang for the buck.

Nationwide, Black people have much higher rates of diet-related diseases — Black adults are 60 percent more likely to be diagnosed with diabetes than white adults.”

The USDA defines a food desert as a low-income tract where many residents do not have easy access to a supermarket or large grocery store.21 In addition to a lack of food outlets offering healthy food, residents’ lack of transportation to get to stores is a big factor. Residents who have to walk with their groceries or take the bus can carry fewer groceries, and transporting perishable items is especially difficult.

According to the USDA, many types of organizations like businesses, local governments and nonprofits are eligible for assistance to address the problems created by food deserts.22 However, like discouraging the consumption of UPFs, such changes take time and certainly will not occur during the COVID-19 pandemic.

Other Environmental Causes of COVID-19

A diet of UPFs puts people at risk for COVID-19 because of the metabolic, immune system and microbiome degradation it causes. But the coronavirus pandemic also has environmental causes and repercussions, says Lawless:23

“All over the world, industrial agriculture has pushed small-scale farmers deeper into forests where these types of pathogens exist. The decimation of forests has also sent those who bring wild animals into city markets deeper into remote forest areas, resulting in human exposure to novel pathogens.

Whether people whose vulnerability to disease has been increased by Big Agriculture or viruses spread from its excesses, most experts agree we need a radical overhaul of the entire food production and distribution system. According to Lawless:24

“First, our industrial food system is decimating our environment. Second, our nutrient-depleted, and chemically saturated processed food supply is changing our bodies from the inside out …

If ever there were a time to consider our eating habits and the domination of harmful agricultural systems it is during this coronavirus pandemic.