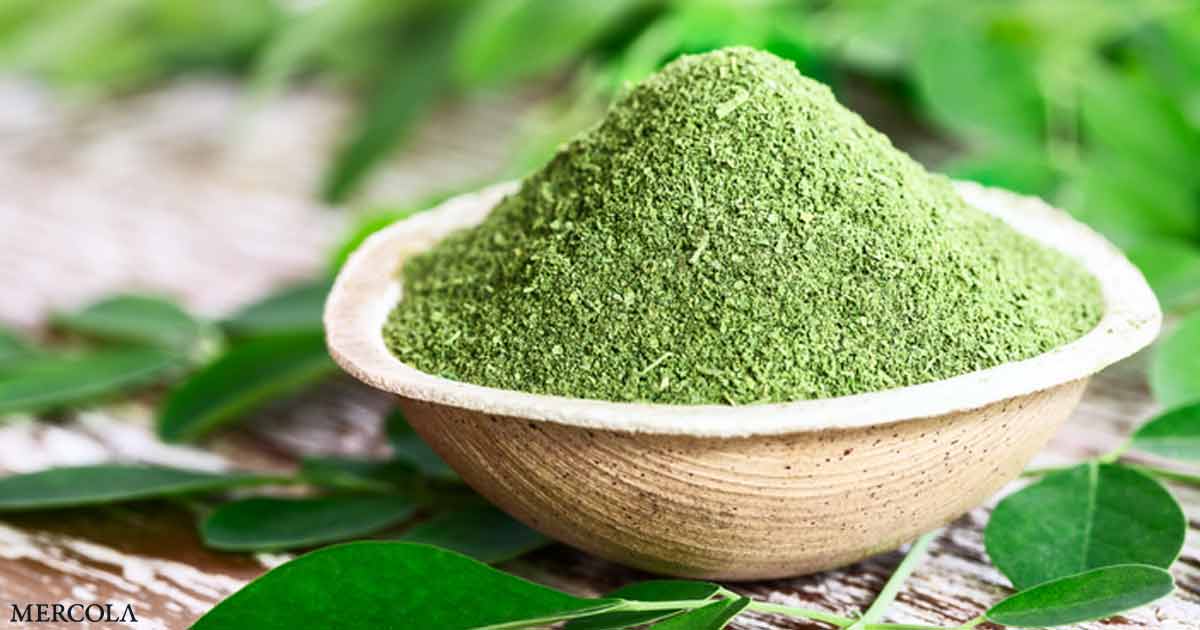 This article was previously published October 8, 2020, and has been updated with new information.

Glucosinolates are sulfur-containing phytochemicals most notably found in cruciferous vegetables like broccoli, cabbage and Brussels sprouts. But research shows that Moringa, also known as the drumstick tree or the horseradish tree, is also high in these health-promoting compounds.

According to a May 2018 report published in Scientific Reports,1 Moringa not only contains high levels of glucosinolates, but also has unique glucosinolates that are responsible for many of its medicinal properties.

Glucosinolates, which are inert, are metabolized into bioactive isothiocyanates by an enzyme called myrosinase.2 The primary isothiocyanate in Moringa responsible for many of its health benefits is moringin,3 created by hydrolysis of glucomoringin.4

Moringin is also known as 4RBITC (after its chemical name, 4-(alpha-L-rhamnopyranosyloxy)benzyl isothiocyanate). Like sulforaphane in broccoli, moringin has potent anti-inflammatory and cytoprotective effects.5

According to Jed Fahey, a nutritional biochemist and assistant professor at Johns Hopkins Medical School, moringin is just as potent as sulforaphane, and in some assays actually more potent.

Before diving into the specific health benefits of Moringa and why glucosinolates are important, it’s helpful to know what Moringa is. Moringa is a tree native to India, Pakistan, Bangladesh and Afghanistan.6

There are 14 different species of Moringa, but the most common and most widely consumed is Moringa oleifera, sometimes referred to as the “miracle vegetable.” If you live in a subtropical area and decide to plant this tree, be careful, as it is one of the fastest growing trees I have ever seen.

I planted a few to have as shrubs that I can harvest for my salad. I stopped using it when I switched to carnivore and six months later, these trees were 25 feet tall, blocking my solar panels, and the trunks had a 12-inch circumference.

For centuries, Moringa oleifera has been used in Ayurvedic and natural medicine as a remedy for inflammation, infectious diseases and chronic conditions such as heart disease, blood diseases and digestive disorders.7

While Moringa oleifera is an excellent source of vitamins, minerals and several phenolic compounds, many of the health benefits of the plant come down to its glucosinolates and the isothiocyanate moringin. Interestingly, recent research has revealed a previously unknown glucosinolate in wild Moringa.

The researchers speculate that this may be due to the manufacturers’ desire to improve the naturally bitter taste of Moringa. Since glucosinolates contain sulfur, they have a distinct, sometimes off-putting flavor.

In addition to GMG and 4GBGS, Moringa oleifera also contains at least 10 other glucosinolates that work together to provide many of the health benefits of Moringa.

Moringa has also been shown to have potent antibiotic activity against a wide variety of pathogens, including Escherichia coli, Salmonella typhimurium, Candida and Helicobacter pylori (H. pylori).9 According to Scientific Reports:10

“… (4RBITC), the isothiocyanate created by hydrolysis of ‘glucomoringin’ … from M. oleifera is a potent and selective antibiotic against H. pylori.

Other studies have shown that the antibiotic activity of 4RBITC from M. oleifera is selective and potent against other important human pathogens such as Staphylococcus aureus and Candida albicans. It also appears to be effective in controlling certain manifestations of both ALS and multiple sclerosis in mouse models.

A growing number of epidemiologic, animal, and clinical studies link dietary glucosinolates and their cognate isothiocyanates to protection against chronic diseases including a variety of cancers, diabetes, and autism spectrum disorder …”

A 2005 study11 in Planta Medica compared the effectiveness of several different isothiocyanates to see which offered the most potent protection against H. pylori. Of the isothiocyanates tested, sulforaphane and moringin (4RBITC) were the most effective.

In another study,12 researchers collected bacteria samples from fecal matter that was supplied by a hospital in Portugal. A total of 18 aerobic bacterial strains, including Enterococcus faecalis, Staphylococcus aureus, Staphylococcus saprophyticus, E. coli (two strains) and Salmonella typhi, were isolated.

Moringa Contains All of the Essential Amino Acids

Moringa is also a source of high-quality protein. Just 2 teaspoons of dried Moringa powder contain 1 gram of protein13 and the total mean protein content of domesticated Moringa oleifera is 30.24%.14 Perhaps most important is the fact that Moringa contains all of the nine essential amino acids, something that many other sources of plant protein fall short on.

Amino acids are important because they’re the building blocks of protein. Conversely, when your body breaks down or digests the proteins you eat, amino acids are what’s left behind. Your body uses amino acids to make new proteins that carry out a variety of different functions, from growth and repair to wound healing to food metabolism.

While your liver breaks down most amino acids, it can’t break down BCAAs. Because of this, BCAAs are broken down primarily in your muscle. As such, they help improve exercise performance and reduce the breakdown of muscle.15

Other Health Benefits of Moringa

In addition to the previously mentioned health benefits, other studies report that Moringa also:

How to Include Moringa in Your Diet

Similar to matcha, most Moringa is available in powder form. The Moringa leaves are dried and then ground to form a concentrated powder that’s rich in all of the beneficial compounds, vitamins and minerals that moringa has to offer.

You can also purchase Moringa in oil or capsule form. When deciding on a source, consider one made from wild Moringa. Wild-harvested Moringa may be more bitter than domesticated versions, but ensures that you’re getting all of the beneficial glucosinolates and the health benefits that come with them.

Moringa supplements can contain a large range of Moringa leaf powder, anywhere from 500 to 2,000 mg, depending on the size of the capsule. The recommended amount for adult supplementation is two capsules per day, one in the morning and one at night.

However, it would be best that you consult a doctor or health practitioner before taking the supplement. This will ensure that the dosage is advisable for you or that the supplement will not interact with any medications you may currently be taking.

While moringa offers impressive health benefits, it’s also important to be aware of the possible side effects moringa supplementation may cause. For pregnant mothers, it’s best that you avoid the use of Moringa oleifera supplements, as there are insufficient studies that show Moringa is safe for pregnant women. There are also a few studies that suggest Moringa, when taken during the early stages of pregnancy, may cause miscarriage due to its ability to cause uterine contractions.46

You can also harvest the seeds, sow them and harvest them like microgreens, i.e., while they’re small, like sprouts.

Other Sources of Glucosinolates

It’s true that Moringa contains unique glucosinolates, like glucomoringin that you can’t find anywhere else, but they’re not the only source of glucosinolates in the diet. If you want to increase your intake of these beneficial plant compounds in other ways, you can do so by including these foods:47