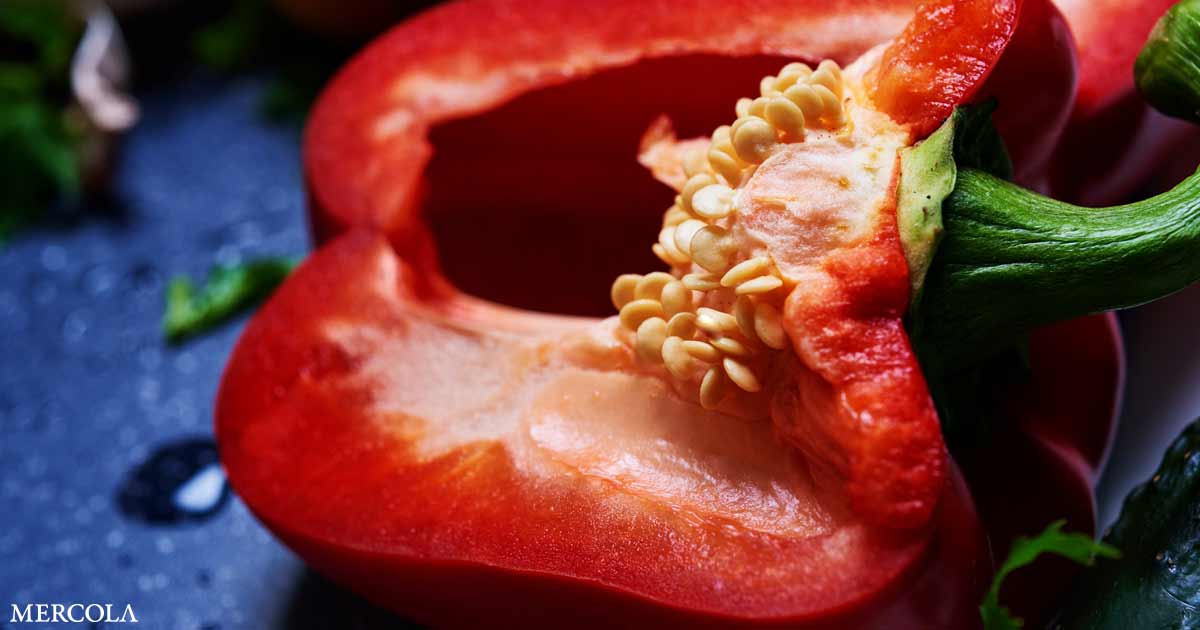 This article was previously published on August 8, 2020 and has been updated with new information.

Vitamin C has always been vital for immune function, but COVID-19 has shed a lot of light on the vitamin. While everyone is rushing to stock up on citrus fruits, there is actually another fruit that contains more vitamin C than any other: red pepper.

Yes, you read that right. Red peppers are often categorized and cooked as vegetables, but because they contain seeds, they are botanically classified as fruits. Of course, you may not be interested in how much it can contribute to your vitamin C intake and what other health benefits red peppers have.

While you might immediately think of oranges or orange juice when you hear the term “vitamin C,” peppers – specifically sweet red peppers – are a far better source.

One cup of sliced ​​raw red pepper contains 117 milligrams (mg) of vitamin C,1 which actually exceeds the current RDA for the whole day. For comparison, the same amount of green pepper contains about 74 mg.2 According to a comparative study in the September 2012 Journal of the Science of Food and Agriculture,3 these numbers increase even more if you choose organic peppers.

Many health benefits of red pepper can be attributed to the combination of bioactive compounds contained in them. One red pepper contains 30 different antioxidants,4 which makes them one of the fruits with the richest nutrients you can eat.

Antioxidants have been shown to help fight heart disease,5 prevent cancer,6 protects against liver disease and fights oxidative stress and inflammation.7 One of the important compounds in red pepper is quercetin, which is known to have a wide range of health benefits. Quercetin has been shown to help reduce inflammation, relieve pain,8 lower blood pressure9 and improve learning and memory.10

Of course, some of the health benefits of red pepper are also the result of its high vitamin C content. Although vitamin C is often valued for its powerful immune-boosting properties, it also has a protective effect against heart disease and early death.

Researchers who published a study in The American Journal of Clinical Nutrition in June 2015 looked at the nutrition and health of 97,203 people. They found that those who consumed the most fruits and vegetables had a lower risk of developing heart disease and a lower risk of early death compared to those with the lowest intake.11

The researchers concluded that this benefit may be due to the high concentration of vitamin C in fruits and vegetables, as those with the highest plasma vitamin C levels had the greatest effect.

Vitamin C has also been linked to better eye health. Oxidative stress has been linked to macular degeneration (AMD) and cataracts, two of the leading causes of blindness in the elderly.

In a cohort study published in the Journal of the American Medical Association in December 2005, researchers found that high vitamin C intake, combined with above-average intake of beta-carotene, vitamin E and zinc, can reduce the risk of developing AMD. by 35%.12

Vitamin C is also heavily involved in your nervous system. It supports your neurons, modulates the transmission of nerve impulses and helps your body produce catecholamines13 or the hormones dopamine, norepinephrine, and epinephrine that help control stress levels.

A February 2018 study published in the Journal of Critical Care found preliminary evidence that the use of vitamin C in addition to standard therapy can help fight inflammation and stabilize heart rate in people with sepsis and septic shock.14 – an emergency situation that accounts for 30% to 50% of all hospital deaths15 and is believed to be the underlying cause of some serious complications and deaths in severe COVID-19 infections. Vitamin C can also be helpful for16:

How much vitamin C do you need?

Vitamin C is soluble in water, which means it dissolves in water and is transported by the body to your cells for immediate use. Your cells take what they need, and all that is left is excreted from your body through urine. Unlike fat-soluble vitamins, your body stores nothing more for later. Your body also cannot just produce vitamin C. This means that it is extremely important to get enough from your diet every day.

The current recommendation for vitamin C is 75 mg per day for adult women and 90 mg per day for adult men.18 While daily doses of a few hundred mg per day make sense for many, there is evidence that higher doses, meaning those over 1000 mg per day, may be better for fighting viruses such as the common cold.19 and Epstein-Barr20 and as part of cancer treatment.21

Other sources of vitamin C

One cup of sliced ​​red pepper gives more than the current recommended daily allowance for vitamin C, but if you want to increase your intake even more, there are many other fruits and vegetables that are also excellent sources of vitamin C.

One of the fruits richest in vitamin C is acerola or Barbadian cherry,22 which provides 1,644 mg of vitamin C per cup.23 Compare that to a medium orange that contains about 69.7 mg of vitamin C.24 Other fruits and vegetables that are especially rich in vitamins include25:

Supplementation is also an option, but it’s best to get what you need from a variety of fruits and vegetables. When you eat fruits and vegetables, you not only get natural vitamin C that is easily absorbed, but you also get dozens of other super nutrients, such as antioxidants and phytochemicals, that help fight chronic diseases, reduce inflammation and help eliminate carcinogens.

However, if you have trouble meeting your diet-only needs, you can supplement a healthy diet with liposomal vitamin C, which has improved bioavailability compared to other oral forms of the vitamin.

In a small study published in Nutrition and Metabolic Insights in June 2016, researchers compared liposomal vitamin C supplements with other types of oral vitamin C,26 finding liposomal supplements increased the amount of vitamin C in the blood more effectively than other non-encapsulated species.

This is because liposomes encapsulate or surround vitamin C, which protects it from the harsh environment of your digestive tract, according to a July 2019 report in the Journal of Liposome Research.27 This helps to slow down the release of vitamins from the supplement and improves absorption.