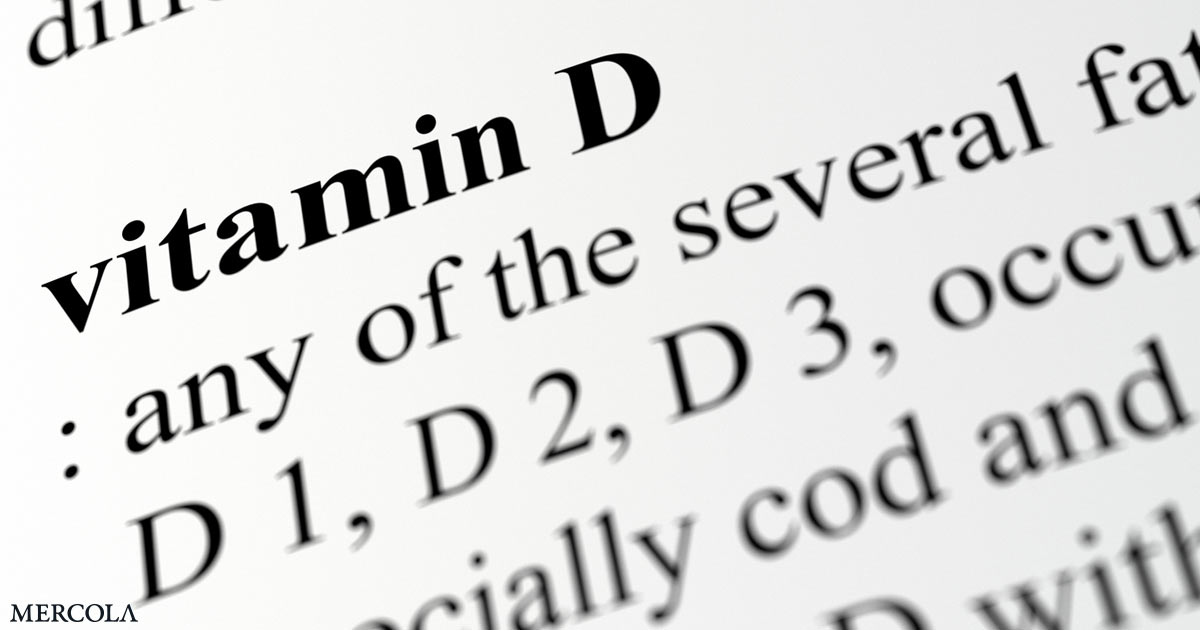 Being aware of your vitamin D levels and increasing your levels if you are deficient are two of the easiest steps you can take to stay well. This includes assistance in protecting against infectious diseases such as COVID-19, as a wealth of data shows that vitamin D levels are strongly correlated with the severity of SARS-CoV-2 infection.1

In the video above, John Campbell, a retired nurse and teacher based in England, details another study showing that people with higher levels of vitamin D are less likely to die from COVID-19 – and suggests that, in theory, ” near-zero mortality rate ”could be achieved if your vitamin D level reaches 50 ng / mL.2

This information has, unfortunately, been largely ignored by the big media, as it can save lives. The good news is that even if the press continues to ignore it, you can easily listen to the advice given in the Nature study and raise your vitamin D levels to the most protective limits.3 This study advised above 50 ng / mL, while targeting levels between 60 and 80 ng / mL may help prevent a wide range of diseases, including cancer.

The authors of the study believe that low levels of vitamin D are not a “side effect” of COVID-19, but are an indicator of infection. As vitamin D plays a role in immune function, the epidemic of vitamin D deficiency increases the spread of many “diseases of civilization”, such as heart disease,4 with reduced protection against infection:5

“One strong pillar in protecting against any type of viral infection is the strength of our immune system. Unfortunately, so far this unquestionable basic principle of nature has been more or less neglected by the competent authorities.

It is known that our modern way of life is far from optimal in terms of diet, fitness and recreation. In particular, many people do not spend enough time outside in the sun, even in summer.

The result is widespread vitamin D deficiency, which limits the work of their immune systems, resulting in an increased spread of some preventable civilizational diseases, reduced protection against infections and reduced vaccination effectiveness. ”

Vitamin D3 deficiency is also “one of the main causes of severe SARS-CoV-2 infections,” they explained, noting that mortality rates are usually elevated in populations with very low vitamin D3 levels, including the elderly, blacks, and comorbidities.6

In the early 20th century, a vitamin D level of 20 ng / mL was found to be sufficient to stop osteomalacia or rickets, and this level is still used today as a marker of “sufficient” vitamin D levels. However, it is far too low for optimal health and prevention diseases other than rickets.

It is now known that vitamin D is essential not only for healthy bones but also for the health of the whole body. As a potent epigenetic regulator, vitamin D affects more than 2,500 genes, and vitamin D receptors are present throughout the body, including the intestines, pancreas, prostate, and immune system cells.7 Vitamin D plays a role in a number of diseases, including:8

Vitamin D receptors are present in almost all cells of the human immune system, including monocytes / macrophages, T cells, B cells, natural killer cells, and dendritic cells. Vitamin D has multiple effects on the immune system, including increasing the production of antimicrobial peptides by immune cells, reducing harmful proinflammatory cytokines, and promoting the expression of antiinflammatory cytokines.9

Cytokines are a group of proteins that your body uses to control inflammation. If you have an infection, your body will release cytokines that help fight inflammation, but sometimes it releases more than it should. If the release of cytokines gets out of control, the resulting “cytokine storm” becomes dangerous and is closely related to sepsis, which can be an important contribution to the death of patients with COVID-19.10

Many therapists for COVID-19 focus on eliminating the virus instead of modulating the hyper-inflammation often seen in the disease. In fact, an uncontrolled immune response has been suggested as a factor in disease severity, making immunomodulation an “attractive potential treatment strategy”.11

Vitamin D is very important here because it helps regulate your innate and adaptive immune system. However, to reap this invaluable benefit, your levels must be higher than officially recommended:12

“Receptor binding involves the creation of a‘ vitamin D3 response element ’(VDRE), regulating a large number of target genes involved in the immune response. As a result of this finding, the scientific community now agrees that calcitriol is much more than a vitamin, but a very effective hormone with the same level of importance for human metabolism as other steroid hormones.

The level in the blood that ensures the reliable effectiveness of vitamin D3 in relation to all its important functions has been questioned again, and it has been shown that 40-60 ng / mL is desirable, which is significantly above the level needed to prevent rickets. ”

Acute respiratory distress syndrome (ARDS) is a condition of the lungs that is common in severe cases of COVID-19, causing low blood oxygen and fluid accumulation in the lungs. Along with cytokine release syndrome, ARDS is one of the most deadly complications of COVID-19, and vitamin D inhibits metabolic pathways that can cause ARDS. According to a study on nutrients:13

“The enzyme that converts angiotensin 2 (ACE2), part of the renin-angiotensin system (RAS), serves as the main entry point for SARS-CoV-2 into cells. When SARS-CoV-2 is bound to ACE2, its expression is reduced, causing lung injury and pneumonia.

Vitamin D3 is a negative RAS modulator by inhibiting renin expression and stimulating ACE2 expression. It therefore has a protective role against SARS-CoV-2-induced ARDS. Adequate levels of vitamin D3 prevent the development of ARDS by lowering angiotensin II levels and increasing angiotensin levels- (1,7). ”

In a previous review,14 The researchers also explained that vitamin D has beneficial effects both during the early viremic phase of COVID-19 as well as the later hyperupal phase,15 including ARDS. “Based on many preclinical studies and human observation data, ARDS may be exacerbated by vitamin D deficiency and reduced by vitamin D receptor activation,”16 they said. “Based on a pilot study, oral calcifediol may be the most promising approach.”

Even regular “booster” doses of vitamin D, regardless of initial vitamin D levels, appear to be effective in reducing the risk of mortality in people admitted to the hospital with COVID-19, especially for the elderly.17,18 Furthermore, vitamin D affects several additional functions that also support a strong immune response:19

Mortality from COVID-19 decreases with higher levels of vitamin D.

The presented study included a meta-analysis of two data sets. One used long-term average vitamin D3 levels for 19 countries, while the other used data from 1,601 hospitalized patients with COVID-19. Hospital data included 784 patients who had their vitamin D levels measured within 24 hours of admission and 817 patients with previously known vitamin D levels.

A strong correlation was found between the SARS-CoV-2 mortality rate and vitamin D levels, so that mortality decreased significantly after vitamin D levels reached 30 ng / mL.20 Furthermore, they noted, “our analysis shows that the correlation for the combined datasets intersects the axis at approximately 50 ng / mL, suggesting that this level of vitamin D3 in the blood may prevent any excessive mortality.”21

Based on their findings, the authors recommend “routinely boosting the immune system of the entire population by vitamin D3 supplementation to consistently guarantee blood levels above 50 ng / mL (125 nmol / L)”.22 Researchers in Indonesia, who looked at data from 780 patients with COVID-19, also found that those with vitamin D levels were between 21 ng / mL (52.5 nmol / L) and 29 ng / mL (72.5 nmol / mL). L) had a 12.55-fold higher risk of death than those with levels above 30 ng / mL.23

Levels below 20 ng / mL were associated with a 19.12-fold higher risk of death. “Most cases of COVID-19 with vitamin D deficiency and deficiency have died,” they added.24

How much vitamin D do you need?

The best way to find out how much vitamin D you need is to test your levels. It is possible to optimize your vitamin D levels through reasonable sun exposure, but if this is not an option for you, daily vitamin D3 supplementation of up to 10,000 units may be needed to achieve a vitamin D level of 40 to 60 ng / mL.

However, if you have COVID and have not been tested, it is best to take a prescription form of vitamin D called calcitriol, which is an activated form of vitamin D, because it works immediately. The dose is 0.5 mcg on the first day and then 0.25 mcg for a week. This is a prescription drug. You should also take 10,000 units of regular vitamin D which will start to work after you stop taking calcitriol.

It is also important to note that vitamin D supplementation must be balanced with other nutrients, namely vitamin K2 (to avoid complications associated with excessive calcification in your arteries), calcium and magnesium. On the other hand, data from GrassrootsHealth’s D * Action studies indicate that the optimal level for health and disease prevention is between 60 ng / mL and 80 ng / mL, while the limit for sufficiency appears to be around 40 ng / mL. In Europe, the measures you are looking for are 150 to 200 nmol / L and 100 nmol / L respectively.

Given the impressive findings from the presented study and others, it is astonishing why large studies are not conducted immediately to determine the best doses of vitamin D for protection against COVID-19. As Campbell said, “The fact that the medical authorities are not doing this, because it is such a simple observational study, really goes beyond negligence.”25